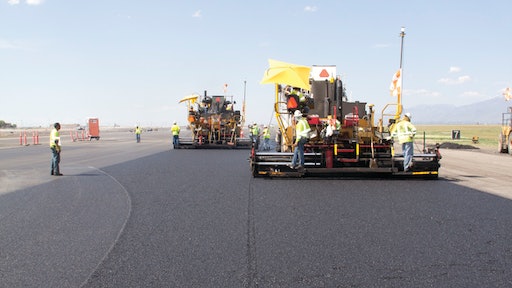 It was 10 years ago that Granite Construction milled and resurfaced the middle runway at Salt Lake City International Airport. The work is mandated to occur about every decade, so earlier this spring Granite crews were back at the airport. It was the same city, same airport, same runway — and a very, very different plan.

“A lot has changed in 10 years,” said Kyle Smith, project manager at Granite. “Ten years ago, we completed this job with one crew and wireline. This time we used two crews, a wireless system and 3D paving in echelon — and we are using intelligent compaction.”

The project called for profile milling and resurfacing of a runway and all the taxiways. Crews removed 4" of asphalt during milling and replaced it in two 2" lifts. During the job, 80,000 tons were placed. Time, of course, was a factor as well. The entire project had to be completed within 60 days.
Specifications required paving to an elevation, and echelon paving was used to minimize the number of cold joints. The echelon requirement meant wireline could not be utilized for elevation control.
This led Granite to launch the use of a Trimble 3D paving system. “We use 3D grading all the time,” Smith said. “As we looked at the need for echelon paving, and the tight tolerances of the FAA, we concluded that 3D paving was our best option.”

The 3D paving process required surveying technology that Granite had utilized on previous projects. The elevation was created digitally and referenced during both milling and paving. “We had been using it on motor graders for finish grading for years,” Smith said. “The technology itself is not new to our surveyors.”

It was new to paving crews, and changed their roles. The pavers—a Cat AP1055D and AP1055B—received information from up to twelve robotic total stations as they moved down the runway. That information directed the screed to be raised or lowered to meet the elevation requirements. All screed adjustments were automatic.

Smith acknowledged starting the process was stressful, particularly given the strict FAA standards. Granite arranged training through the local Cat dealer, which spent more than a week on the jobsite ensuring all crew members were up to speed. The training included paving with sand to provide the crew with hands-on experience.

The preparation for 3D paving takes a great deal of work, Smith said, but when work starts it moves along quickly. “The prep work is all basically done by building the model,” Smith said. “We don’t need surveyors setting elevations and installing wireline. That prep work is done prior to the start of the project, so we can just get out there and pave.”

The trucks were 30 minutes from the plant. The paving began in April—“There was still snow in the mountains,” Smith said—so quickly cooling mix was a concern.

The paver worked at a pace of 20-25' per minute during the early, cooler days. “That pace is driven by surface temperatures,” Smith said. “With the 2" mat, we can’t let the paver outrun the rollers. The pace is strictly a function of compaction and has nothing to do with the technology.”

The paver operator steers the machine and sets the pace. The screed men are responsible for switching the signal reception from one station to the next as the paver moves down the runway. They also monitor an on-board display to ensure the screed is responding properly.

The pace was slowest at the start of the project while crews adjusted to the echelon paving process, and the volume of machines and personnel that go with it. “Trying to get two pavers to work side-by-side, it’s a challenge,” Smith said. The pavers worked within 100' of each other. Mix was 320° when it left the plant, between 300°-310° when it arrived, and between 280°-290° behind the screed.

Specified tolerances were 2/100 of a foot, and the crews consistently hit or exceeded that goal. A quality control surveyors worked behind the screed, double-checking tolerances.

The pavers worked at a width of 15' on the first 2" lift and 19' on the second lift. “We started with a narrow approach so the crew could become comfortable with the 3D system while working with a more traditional width,” Smith said.

Compaction was a concern early in the project because of the cool temperatures and relatively thin lifts.

Six compactors were used—three behind each paver. Four of the rollers—the two breakdown and two intermediate rollers—utilized intelligent compaction.

“The intelligent compactors have GPS,” Smith said. “We utilized pass counts and mapped temperatures. Operators had screens on their rollers. They could easily see where they had been and they knew the mat temperatures and whether they should be working faster or slower to avoid the tender zone.”

The quality control supervisor also had access to the data. “He could make adjustments to improve consistency,” Smith said.

Each compactor has a wireless transmitter that relays information as part of Product Link, a remotely monitored fleet management system. The machines were also equipped with a Trimble wireless modem that relays pass-count and temperature information in real time. That data is then accessed through VisionLink, which enables it to be analyzed by crew leaders on the jobsite and others back at the office. Both long- and short-term adjustments are made from that data.

The project specified the use of two IC rollers, but Granite chose to use four. “We saw this as a testing ground,” Smith said. “Intelligent compaction is something we can utilize across our fleet. It can have an impact on highway and other paving projects. Quality control incentives on DOT jobs can be substantial, and intelligent compaction should help us reach those targets.”

Four of the compactors were Cat CB64s, the fifth a CB564D. All rollers made three passes, with a movement forward and back counting as a single pass. Breakdown and intermediate rolling was done with full vibration, as was the first pass or two of finish rolling. The temperature was between 210°-230° after completion of breakdown rolling; between 180°-200° after intermediate compaction; and between 160°-180° after finish rolling.

The FAA specs mandated cutting off a 3" edge on all longitudinal joints. This was accomplished through the cutting wheel option on the CB54B. “The last roller operator cut all the joints per project specifications,” Smith said. “He completes his pattern, then drops back and cuts the edge.”

Much has changed in 10 years. Still, in some ways Smith feels like the technology is helping Granite keep pace more than break new ground. “As technology is introduced, I think the specs are getting tighter and tighter too,” he said. “Customers are requiring more from us in terms of tolerances, and they’re asking us to work faster. The new technologies help us meet their expectations and—somewhere along the way—become necessities.”

Contactors are still seeing high levels of backlog and remain relatively optimistic about the state of the civil construction market.
Command Alkon
October 13, 2020