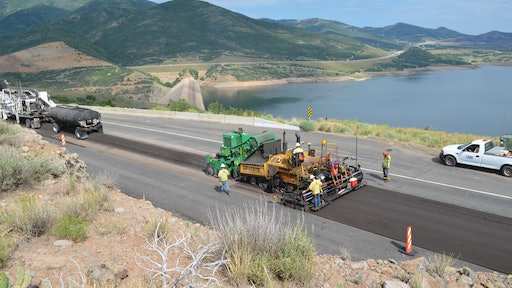 "Basically, we take the existing asphalt on the road, we pick it up, re-work it, add some life to it, and put it right back down on the road," says Justin Schellenberg, UDOT project manager. The process is called "cold" in place recycling because the material does not have to be heated to temperatures in excess of 300° F.

Preserving existing pavement on roads before its deemed irreparable is a trend that’s gaining support. The Utah Department of Transportation (UDOT) is using cold in-place recycling (CIR) to extend the life of many roads in the state, including an 8-mile stretch of road on State Route 32. UDOT estimates a cost savings of 40% on this $4 million preservation investment.

“UDOT routinely monitors the pavement conditions on our roads to determine the appropriate treatment for each one,” says Muriel Xochimitl, region 3 communications manager at UDOT. “When a new state road is built or an existing one is transferred to the state, we assign it a maintenance schedule and prioritize funding for it. Generally, construction is scheduled about every 7-10 years on a road depending on the pavement need.”

“As with all of our roads, our pavement management team had been monitoring SR 32 and determined it required treatment,” says Xochimitl. “UDOT’s primary objective was to prolong the life of the road so that it will last 20 more years without extensive maintenance. In addition, we wanted to install a new friction surface that would improve safety by creating skid resistance for vehicles driving on the road.”

Xochimitl says the choice to use the cold in place recycling method on this project was made in the fall of 2011 when UDOT maintenance crews cored the road and the pavement engineer developed the pavement design. “We received funding for the work in fall 2012 and the initial pavement design was finalized in summer 2012,” says Xochimitl. “Work began on July 8 and went through August 16,” she adds.

So what exactly does the method of CIR entail? According to the Asphalt Recycling and Reclaiming Association (ARRA), CIR is defined as a rehabilitation technique in which the existing pavement materials on the ground are reused in place without the application of heat.

“Basically, we take the existing asphalt on the road, we pick it up, re-work it, add some life to it, and put it right back down on the road,” says Justin Schellenberg, UDOT project manager. The process is called “cold” recycling because the material does not have to be heated to temperatures in excess of 300° F.

“There are note-worthy benefits to the process,” says Xochimitl. “It’s cost-effective, environmentally-friendly and less impactful to the traveling public.” Xochimitl elaborates below:

Environmentally-friendly: There is very little heat applied to the asphalt. Because CIR is a mobile operation onsite, it does not need a fixed facility like a traditional HMA job. In addition, the material being processed during a CIR project is at ambient temperature, whereas HMA is generally processed at 280° F - 300° F. This makes the process more environmentally-friendly because the lower temperatures reduce the fumes that a traditional HMA process could produce. In addition, there are significantly fewer construction vehicles traveling back and forth from the project site to the production pit which cuts down on the amount of vehicle emissions.

Cost-Effective: “We calculate that using CIR on this project reduced costs by 40%,” says Xochimitl. This is due to lowered labor costs because fewer workers are needed to get the job done, less construction equipment and reduced material quantities.

Lessened Impacts:  Since the construction operations are all contained on site, there are fewer vehicle trips related to construction through the area that could have otherwise affected traffic flow or increased noise in the surrounding community. In addition, this onsite containment increases efficiency because crews are able to complete work much faster. For this project, the contractor calculates they used 30 fewer trucks than a traditional paving job of this magnitude.

Not your typical paving job

“On a typical project, you remove the existing asphalt, haul it off site, and bring it back on site,” says Sean Rivera, Granite Construction project manager. “On this job, we can have everything in a nice row, where we are paving all day long. This is basically a moving plant down the highway,” says Rivera.

The recycle train consisted of a Roadtec RX-900 Cold Planer, a Roadtec RT-500 Recycle Trailer that has a screen, crusher, pugmill and a microprocessor to weigh and calculate the additives needed for the recycled material.  Also, various support equipment is used for the additives such as lime slurry and emulsion.

Just seven crew members were needed for the CIR process itself. A traditional paving method would have required 12-20 more truck drivers carrying pavement materials from a production pit to the construction site. In addition, traditional paving would have needed two more crew members on the mill itself, one for the water truck and two individuals for brooming. Using the CIR method on this project resulted in approximately 17-25 fewer crewmembers needed.

In addition to the fewer crewmembers required onsite, the CIR method also reduces the number of people needed at a processing plant. Those individuals would have included workers needed to run the hot plant, crusher, the transfer of materials, the mining of the aggregate, etcetera.

“In the final phase of the process, crews use a new layer of asphalt over the recycled materials and then a chip seal is applied to protect the road,” says Rivera. Conventional paving and compaction equipment are used for final paving operation.

Why not every road?

If CIR is such a cost saving method to preserve the road, many taxpayers are asking why every road isn’t being repaved this way. “Not all roads are good candidates for this process, this one fit,” says Schellenberg.

ARRA says in order for a road to be a good candidate for CIR, it actually still must be in pretty good condition. Asphalt roadways with good structural strength, coupled with at least three to five inches of existing asphalt material, are good candidates. However, each road must be evaluated on an individual basis to determine whether or not it is a good candidate for the process

“Because SR 32 is located in a rural area with less traffic and lower truck volumes and because the existing pavement was in fairly good condition, the CIR method worked well here,” adds Xochimitl.

“We have not received any complaints regarding using CIR on SR 32 and feel that there are no significant drawbacks to using the method on this road,” says Xochimitl. “UDOT is committed to protecting the tax-payer investment by implementing efficient, cost-effective technologies. We are constantly looking for ways to improve and are open to using CIR on future projects should the appropriate conditions warrant it.”

“Again, we recognize that it would not be ideal for all roads,” says Xochimitl, but UDOT has used this process on several projects including SR 191, portions of SR73 near Saratoga Springs and an upcoming project in region 4 later this year. “We’re doing it as often as we can,” Schellenberg adds.