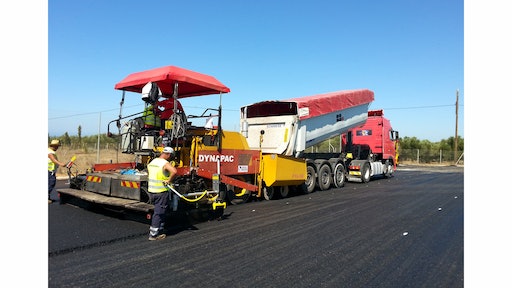 Palm trees, beaches, the sound of the sea – against this backdrop in Greece, in October Volkswagen unveiled the newest model of the VW Passat to more than 20,000 dealers from around the world. The dealers were then also able to personally test drive the new car. A new test track was built especially for this purpose.

For the asphalt paving of this test track the contracted construction company Kostas Papadopoulos Ltd and the sub-contractor Asphalt Dynamic SA relied on MOBA levelling technology. The Dynapac F16-6W paver built two layers of asphalt, each one measuring five centimeters thick and topped with a four centimeter thick surface layer, with an incline of 2.5 percent on the 300 meter long stretch. Subsequently the material was compacted by two rollers.

The project was difficult due to the layout of the site and the varied widths of 28 to 55 meters, hence the course was a challenging construction job having different widths throughout the track. This meant that the screed width had to be set to achieve a  track width of 2.50 meters up to 4.80 meters. As a result, driving with a string on both sides was quite challenging. Therefore, the construction company decided to build with the MOBA-matic II levelling system in order to adhere to the plus/minus two millimeters precision required.

Because the substructure was already very level, the construction company decided to work with just one Sonic-Ski plus on each side. The first layer was built with the help of a string that the Sonic-Ski plus ultrasonic sensor could use as a height reference. While putting down the second layer and the surface layer, the "Ground Sensing" mode – hence the scanning of the substrate – was set using the MOBA-matic II control panel so that the Sonic-Ski  plus, which operates contact-free, could essentially use the previously laid substrate as a reference and copy the height.

Ease of operation, precise results of the levelling system

The system is very easy to use. John Karizonis from MOBA dealer MOBACT who installed the system: "In just a few hours the screed operator had already memorised the functions of the new control panel. It is really easy to use, even for untrained operators”.

What does the customer like about the system? "The system itself," is the simple answer from Panos Tatoulis, who worked with the MOBA system for the first time. "The result was extremely precise when we worked with the string, but just as much so when building without a string. As such, we not only saved time but also a lot of material. And we required fewer people on the paver. Consequently we could assign two persons to other tasks at the construction site."

Kostas Papadopoulos was then also very satisfied with the result of the track. There was no problem whatsoever adhering to the required planarity and the contractors got the job done within the stipulated construction time – so the cars could be tested on the new track.