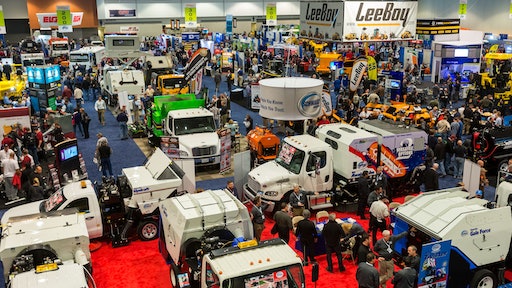 Attendance at National Pavement Expo, Jan. 28-31 in Nashville, surpassed 3,300 people, making the 30th annual event the best-attended in its history, according to Amy Schwandt, show manager.

“Despite a winter storm in New England that caused some problems for contractors and even a few speakers, we had the largest crowd we’ve ever had,” Schwandt said. “The conferences were jam packed and the exhibit floor buzzed for three days.”

Schwandt, who is also publisher Pavement Maintenance & Reconstruction and Asphalt Contractor, attributed the 49% increase in attendance over 2014 to several factors: the improving economy, a major equipment giveaway, top industry speakers for its conference, a sold-out exhibit hall, and expanded marketing.

“We introduced two new features in 2015 that were huge hits. The first was CASE Construction’s equipment giveaway, a DV26 roller valued at more than $51,000,” she said. John Pond, owner of Forest City Paving in Rockford, IL, won the roller drawing. His entry was selected from more than 1,500 entries on the last day of the trade show.

"This is huge for us; no way could we have purchased a roller like this,” Pond said. “We're a small company and two years ago we had to sell a similar size roller due to the downturn in the economy."

The expo’s other new feature was the industry’s first Pavement Awards program, which recognized 14 individuals and companies that have enhanced the paving and pavement maintenance industry. Pavement Maintenance & Reconstruction magazine launched the Pavement Awards this year to celebrate National Pavement Expo’s 30th year, and award recipients were announced on the first day of NPE during the “Sneak Peak” on the exhibit floor.

According to Allan Heydorn, conference manager, the conference evaluation forms confirmed that attendees appreciated the real-world experience that speakers brought to their education sessions. “The speakers shared practical, in-the-trenches knowledge and expertise that help attendees improve their profitability,” Heydorn said. “Most of the 53 sessions were at room capacity, indicating our session topics were on the money and that contractors recognized the impact our speakers could make.”

Among the sessions that drew record crowds were these top-rated educational seminars and workshops:

How to Be an Effective Leader & Coach, Brad Humphrey, Pinnacle Development Group

In 2016 National Pavement Expo will return to Charlotte, NC, for the first time since 2009.

NPE 2016 will be held Jan. 27-30 at the Charlotte Convention Center in downtown Charlotte. It's the fourth time Charlotte – home of the NASCAR Hall of Fame – has hosted the annual paving and pavement maintenance trade show and conference program.

In addition to more than 50 educational sessions and exhibits open Thursday, Jan. 28 and Friday, Jan. 29, the 2016 NPE will again feature a "sneak peek" night on the exhibit floor on Wednesday, Jan. 27 beginning at 4:30.

Exhibitors can reserve show space now and conference details and registration information will be available this summer at www.nationalpavementexpo.com.