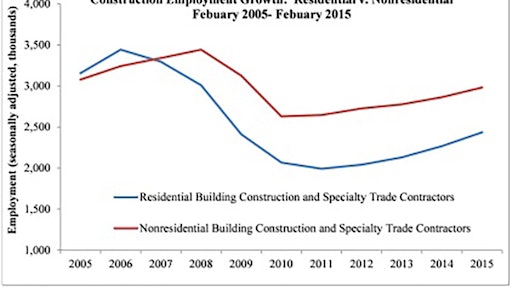 "Despite another brutal winter and certain indications of near-term economic weakness, nonresidential construction added jobs in February along with most sectors of the economy," said ABC Chief Economist Anirban Basu. "February's job growth is even more impressive given the recent weakness in retail sales, softer economic growth during 2014's final quarter, the West Coast port slowdown and sagging oil prices, all of which may have inhibited construction job growth.

"Employment has expanded by nearly 5 percent in just one year, an indication of ongoing brisk recovery in a key nonresidential segment," emphasized Basu. "There are now 722,400 nonresidential building jobs in the United States, up from 690,800 positions a year ago, with employment among specialty trade contractors expanding by 27,200 positions in February and nonresidential specialty contractors contributing 10,000 of those net new positions. Heavy and civil engineering construction declined by 3,700 jobs in February; however, this is likely a reflection of challenging weather, slowing oil production-related construction and trends in public capital spending."