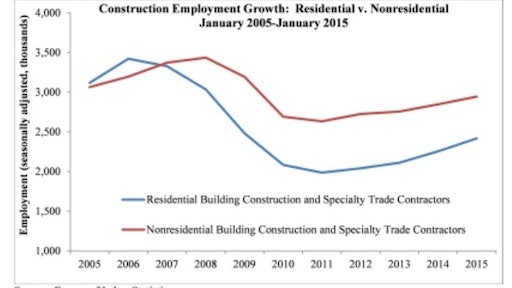 "Construction added more jobs than all but one sector of the economy, and today's report provides additional evidence that the economic momentum generated during the final nine months of 2014 will persist into 2015," said Associated Builders and Contractors Chief Economist Anirban Basu. "While the U.S. dollar — which spiked in response to this jobs report — will slow export growth and federal spending dynamics will remain a brake on momentum, consumer spending will remain a powerful, forward-moving force. Capital spending should accelerate in most economic segments, though the oil sector will be among the noteworthy exceptions. Interest rates remain incredibly low, which serves as another important tailwind for nonresidential construction this year.

"A continuation of strong job creation, significant wage growth, and a post-recession high in labor force growth all make today's jobs report one that economists didn't dare to dream about," said Basu. "Consider that the national economy has added over 200,000 jobs for 11 consecutive months, and job creation over the past calendar year is as fast as it has been since the middle of 1999."

One of the only sectors that lost jobs in January was oil and gas extraction, which decreased by 1,900 jobs for the month. "The decline in upstream oil and gas employment is attributable to declining oil prices," said Basu. "Though the data isn't currently available, it seems likely that many of those displaced workers are in North Dakota and Texas, the two areas with booming energy industries. Given that those states have skilled-labor shortages, those displaced workers should be able to transition to the construction industry. This notion is supported by the construction unemployment rate's brisk expansion."

According to the BLS household survey, the national unemployment rate inched up to 5.7 percent in January, as over 700,000 persons entered the labor force. This rate is almost a full percentage point lower than January 2014's headline number. The construction unemployment rate rose to 9.8 percent in January, a 1.8 percent increase from the previous month. Average hourly wages expanded by 0.5 percent on a monthly basis and are now up 2.2 percent on a yearly basis.