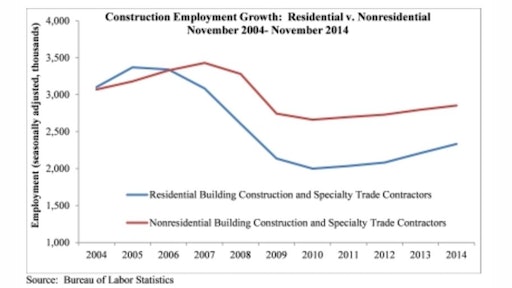 "It is important to note that the greatest constraint on nonresidential job growth may no longer be a lack of demand for construction services, but rather a lack of supply of sufficiently skilled workers," said ABC said Chief Economist Anirban Basu.

"Nonresidential construction added nearly 5,000 jobs in November and the outlook remains positive," said Associated Builders and Contractors Chief Economist Anirban Basu. "It is important to note that the greatest constraint on nonresidential job growth may no longer be a lack of demand for construction services but rather a lack of supply of sufficiently skilled workers. Growing demand for human capital coupled with tighter labor markets strongly suggests that industry wage pressures will expand in 2015, perhaps to the extent that margins will be rendered too thin for many firms, even in the face of rising demand for services.

"The U.S. economy has shifted into a higher gear," said Basu. "A combination of surging stock prices, lower energy costs, rising consumer confidence, solid job creation, and improvement in the quality of jobs being added has helped move the economy closer to a sustained 3 percent rate of growth. For the most part, this represents good news for the nonresidential construction industry."