Despite nonresidential construction adding 5,000 new jobs in March, the US construction industry lost 1,000 jobs for the month 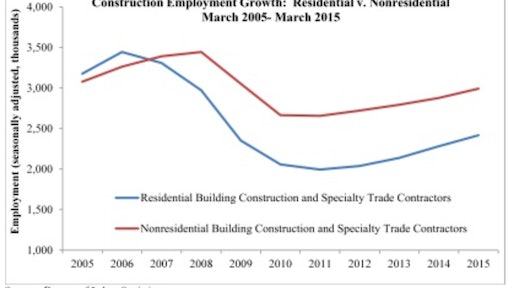 "Today's jobs report was a stunner and construction was not spared as the sector lost jobs for the first time in 15 months," said ABC Chief Economist Anirban Basu. "Coming into the week, the consensus estimate for March's net new job creation was in the range of 250,000. An ADP report released earlier in the week indicated that the U.S. private sector only added 189,000 jobs, which brought the consensus estimate closer to 200,000, however the initial Bureau of Labor Statistics' estimate for March fell well short of even that diminished expectation.

"The knee-jerk reaction is to blame the weather," said Basu. "While that seems natural, the fact of the matter is that the latest employment release comes on top of a sea of other data indicating that the U.S. economy has been losing momentum since the third quarter of last year and retail sales and manufacturing-related data have been among the sources of disappointment.

"Weather serves as a potential partial explanation, but another possibility is that some of the slowdown in job growth is attributable to reduced activity in the nation's energy sector," said Basu. "While lower fuel prices are helping to support various forms of activity, the impact on oil producers has been jarring. Those operating in the oil exploration and production segments of the economy have come to dominate layoff announcements recently. It may be that the negative impacts of lower energy prices are felt more intensely in the short-term, but that the positive effects will become obvious later this year."