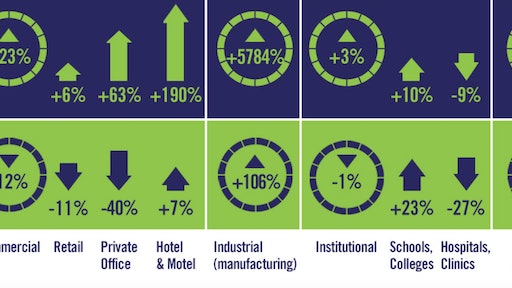 March recorded $25 billion of nonresidential construction starts, which was 32.4% higher than February, according to CMD data. The long-term average February-to-March increase in CMD's nonresidential building starts has been 6%.

While the large month-to-month gain this year warrants cheers, it should be noted that February-to-March’s rise last year was also outsized. In fact, it was even bigger, at 40.3%. Furthermore, compared with the same standalone month of 2014, March of 2015 was down 5.1%. Year-to-date starts in 2015 are an improvement; however, at 2.6% versus Q1 of 2104.

According to the Bureau of Labor Statistics (BLS), employment in construction stayed flat in March after significant gains totaling 144,000 net new jobs in the preceding four months. Year-over-year employment in construction is now 282,000, for a%age increase of 4.7%. By way of comparison, the year-over-year%age increase in U.S. total jobs is 2.3%.

Before there can be on-site construction activity, projects must be contemplated and planned by owners and rendered into working drawings by design professionals. The year-over-year increase in architectural and engineering services jobs in March was 3.8%, the same as in February. That February-March tie at 3.8% was the highest in eight years, dating back to March 2007 (4%).

Among the major subcategories of construction starts, commercial work (23.1%) recorded the largest percentage gain month to month in February. Institutional starts (2.6%) also advanced, as did engineering/civil work (1.3%), but their increases were barely more than tentative.

Industrial starts (5784.3%) streaked into the stratosphere. This was partly due to the mathematics of the%age change calculation. The denominator from the base period (i.e., February) was a very low number.

It’s also true that industrial starts are prone to volatility depending on the timing of go-aheads for specific ultra-large projects. March’s ‘Top 10’ list includes $4 billion of groundbreaking work on an ethane cracker and derivatives facility in Louisiana for Sasol Limited of South Africa. While lower world oil prices are causing some major U.S. investment projects to be put on hold, the improvement in America’s domestic energy supplies is sparking opportunities as well.

When March of 2015 is compared with the same month of last year, all three major sub-categories struggled to varying degrees. Commercial (-35.4%) was down the most, followed by institutional (-12.5%), then heavy engineering (-2.1%).

The value of industrial starts, though, was ahead by 196 percent.

The 2.6% gain in year-to-date total starts in March resulted from better volumes in engineering (7.7%) and the smaller category of industrial (105.5%). Institutional work (-1.1%) fell behind slightly; but it’s been the commercial category (-11.5%) that has disappointed the most.

Within institutional, the dollar volume of ‘school/college’ starts is currently about four times as great as for second-place ‘hospitals/clinics’. Educational facility starts have picked up across the board: 9.6% m/m; 17.7% y/y; and 23 percent ytd. Health care starts are still in the doldrums: -9.3% m/m; -49 percent y/y; and -27.1% ytd.

Among the 12-month moving average trend graphs that accompany this report, two subcategories – ‘schools/colleges’ and ‘roads/highways’ – are clearly trending higher. ‘Private office buildings’, which had been headed downwards over the past year, leveled off in March. All of the other categories have been moving within ranges minimally better or worse than flat.

Due to the signs of cyclical improvement in the construction sector, many analysts are becoming interested in how wage rates are performing. According to March’s Employment Situation report from the BLS, construction’s average hourly earnings at 2.6% year over year were better than for all jobs, at 1.8%. But average weekly earnings were exactly the same, 1.8%.

CMD’s nonresidential construction starts series, because it is comprised of total-value estimates for individual projects, some of which are mega-sized, has a history of being more volatile than many other leading indicators for the economy.

A start is determined by taking the announced bid date and adding 30 days. It is then assumed the project will break ground within 30 to 60 days of the start date. CMD continues to follow the project via its network of researchers. If it is abandoned or re-bid, the start date is updated to reflect the new information.