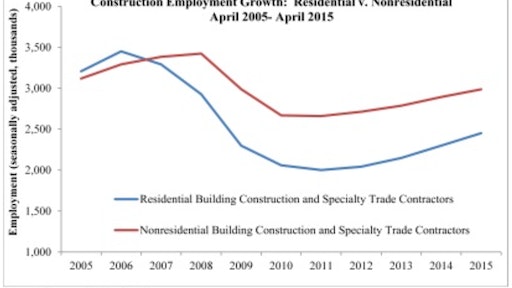 “After losing 9,000 jobs in March, the 45,000 jobs gain posted in April exceed all expectations,” said Associated Builders and Contractors' Chief Economist Anirban Basu. “Construction spending should expand in the coming months as projects that were delayed during winter come to fruition.”

"While the broader jobs report proved better than expected, April was the best month for construction employment since January 2014," said Associated Builders and Contractors Chief Economist Anirban Basu. "Though it may have been expected to see solid job creation performance reflected in today's report, it is still a relief to obtain a nice piece of data. Economic data regarding retail sales, industrial production and other elements of economic life have largely been disappointing to date, and the March jobs report fell in line with that series of uninspired results. Data regarding unemployment claims strongly suggested that employers viewed the recent bout of economic weakness as temporary. The lack of new lay-off activity indicates an ongoing demand for labor, and April's reasonably strong employment gains suggest that many employers continue to search for additional staffing.

"After losing 9,000 jobs in March, the 45,000 jobs gain posted in April exceed all expectations," said Basu. "Construction spending should expand in the coming months as projects that were delayed during winter come to fruition."

"The lone underperforming segment in April was mining and logging, which lost 15,000 net jobs," said Basu. "The sector has now lost jobs in each of the year's first four months after gaining jobs in every month of 2014. Mining and logging has lost more jobs during the first quarter of this year (-48,000) than it added in all of 2014 (+42,000), a direct result of the plummeting oil prices.