Unfilled construction positions dropped by 13,000 in March but remained at the third highest level since the Great Recession ended 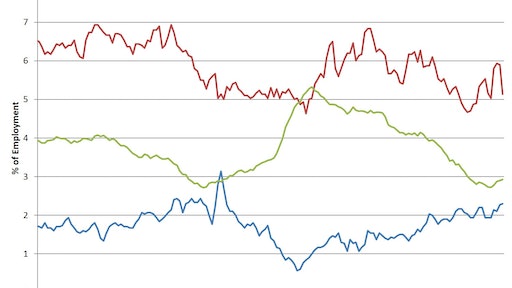 Over the last year, the open construction jobs rate has typically been higher than the rates that were experienced during the 2001-2003 period prior to the building boom. March hiring in construction was soft, posting the smallest count of new hires since September of 2014. The March number of job quits held steady at 122,000.

According to the BLS Job Openings and Labor Turnover Survey (JOLTS) and National Association of Home Builders (NAHB) analysis, the number of open construction sector jobs (on a seasonally adjusted basis) declined from 160,000 in February (the highest monthly total since 2007) to 147,000 in March. Over the last few months, the construction labor market has experienced swings in the monthly count of new hires, as the share of open construction jobs has trended higher. The March estimate of open construction jobs is the third highest since the Great Recession ended.

On a three-month moving average basis, the open position rate for the construction sector held steady at 2.3 percent in March. Over the last year, the open construction jobs rate has typically been higher than the rates that were experienced during the 2001-2003 period prior to the building boom. The open rate has been trending upward since 2012.

The March construction sector hiring rate, as measured on a three-month moving average basis, declined to 5.13 percent. March hiring in construction was soft, posting the smallest count of new hires since September of 2014 and a net decline in the number of jobs in residential construction. The March number of job quits held steady at 122,000.

Monthly employment data for April 2015 (the employment count data from the BLS establishment survey are published one month ahead of the JOLTS data) indicate that total employment in home building/remodeling stands at 2.452 million, broken down as 694,000 builders and 1.758 million residential specialty trade contractors.

In April, home builders and remodelers added a significant number of new jobs on a seasonally adjusted basis after a weak March: 23,600, the largest monthly gain for the current business cycle. Over the last 12 months, the industry has added 153,000 jobs on a net basis.

Since the low point of industry employment following the Great Recession, the residential construction industry has gained 465,800 positions, although employment remains 998,000 lower than the peak level seen in early 2006. The industry has been adding on average just under 14,000 jobs per month over the last six months.

Many builders continue to cite access to labor as a business challenge as the market recovers (see this Builder/Metrostudy labor market analysis for recent industry survey data as discussed by Toby Morrison). David Bier at the Niskanen Center provides additional analysis with respect to the overall construction sector, analyzing the sector’s Beveridge Curve (the ratio of the unemployment rate to job openings by year), while highlighting the degree of labor market tightness in a historical context and its lessons for labor policy.

For the economy as a whole, the March JOLTS data indicate that the hiring rate remained at 3.6 percent of total employment. The hiring rate had been in the 3.1 percent to 3.5 percent range since January 2011 but rose above 3.5 percent for the first time in September as job creation accelerated at the end of 2014 and has remained higher since that time. The overall job openings rate ticked lower to 3.4 percent in February.