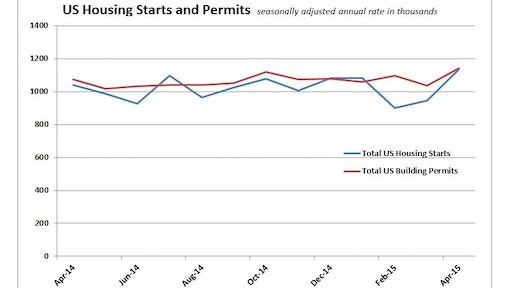 US housing starts rose in April 20.2% to a seasonally adjusted annual rate of 1.135 million units, the highest level of housing production since November 2007. Residential permits issued rose 10.1% in April to an annual rate of 1.143 million.

Nationwide housing starts rose in April 20.2% to a seasonally adjusted annual rate of 1.135 million units, the highest level of housing production since November 2007.

“Our builders tell us that consumers are slowly returning to the market,” said Tom Woods, chairman of the National Association of Home Builders and a builder from Blue Springs, MO. “This month’s report shows release of pent-up demand and evidence of a sustainable housing recovery.”

“The April gains make up for the production dips we saw in the past two months, but single-family housing is still only about halfway back to what could be considered a normal market,” said NAHB Chief Economist David Crowe. “With low interest rates and affordable home prices, we expect more upward momentum in the months ahead.”

Combined single- and multifamily starts were up in three out of the four regions in April. The Northeast posted an 85.9% gain, the Midwest rose 27.8% and the West increased 39%. Housing production dropped 1.8% in the South.