Prices have now fallen in six of the previous eight months 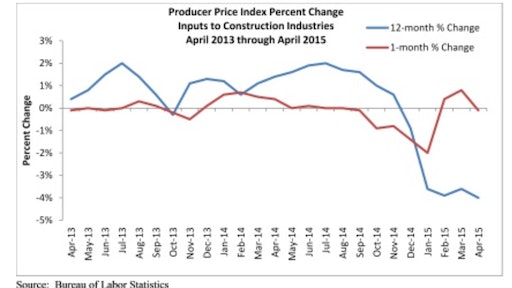 Prices for inputs to construction industries fell by 0.1% in April, ending a two month streak during which material prices expanded by greater than 0.4%.

Prices for inputs to construction industries fell by 0.1 percent in April, ending a two month streak during which material prices expanded by greater than 0.4 percent. Prices have now fallen in six of the previous eight months and input prices are also down on a year-over-year basis, falling 4 percent since April 2014. This represents the greatest year-over-year decline since October 2009 and year-over-year input prices have now declined for five straight months after expanding in each of the previous 60 months. Prices for inputs to nonresidential construction showed a similar decline, falling 0.1 percent for the month and 5.1 percent year-over-year. Crude petroleum prices expanded for only the second time in the previous ten months, growing by 13.1 percent, the largest month-over-month increase since November 2011.

"Construction input prices have now fallen by greater three percent on a yearly-basis in each of the year's first four months," said Associated Builders and Contractors Chief Economist Anirban Basu. "This is only the second time that price increases have been so suppressed over such a prolonged period and the first since the middle of the financial crisis in the second and third quarter of 2009. That said, the underlying dynamics of this period of downward trending prices are fundamentally different than those experienced in 2009.

"Two major factors contributed to April's falling prices," said Basu. "The strong U.S. dollar, which has expanded by over ten percent against the currencies of the United States' primary trading partners, has neutralized any underlying inflationary pressures. The other key factor in the subdued price growth is lower energy prices. Consider that prices for crude petroleum, natural gas, and crude energy materials are all over 40 percent lower than in April 2014.

"The U.S. economy continues to disappoint as the expectation had been that the U.S. economy would significantly outperform the balance of the advanced world's economy this year," said Basu. "While there is still a chance that that could happen, several sectors of the economy continue to underperform, none worse than retail. Data released yesterday indicate that sales remain flat despite improved weather.

"One of the byproducts of a slow economic start has been a weakening dollar," said Basu. "Most forecasters had predicted that the U.S. dollar would march toward parity with the Euro. That hasn't happened and as of this morning, one euro buys $1.14. A weakening dollar is consistent with rising input prices, and should lead to renewed price growth in the near future. For now, however, the impact of previous increases in the value of the dollar are dominating price dynamics."

Only four of the key materials prices increased in April.

Seven of the 11 key construction inputs did not expand for the month.