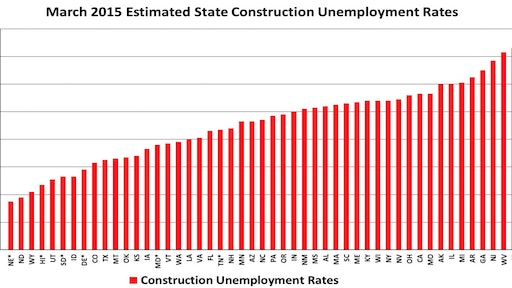 Wyoming jumped from number five in February to number three in March. Hawaii, with a combined construction and mining unemployment rate, held at number four between the two months. Hawaii has benefited from improved residential building activity and investment in facilities for tourists. It also benefits from relatively good weather during the winter months, giving it a leg up over many of the other 49 states.

Utah dropped from number three in February to number five in March and was also among the handful of states that saw both its monthly construction unemployment rate increase from February and its year-over-year rate increase. Given Utah’s relatively strong economy, the state may well be attracting unemployed construction workers from other states (e.g., from North Dakota) who will, at least temporarily, swell the ranks of the unemployed.

Among the states with the five highest construction unemployment rates in March, four of the five remained the same as in February.

Rhode Island and Connecticut retained the unwelcome position of the worst and second worst construction unemployment rates, respectively. Although both states have experienced improvement in their economies, they have relatively high overall unemployment rates and have suffered through a particularly harsh winter. Further, Rhode Island was especially hard hit by the Great Recession and has struggled with its recovery. Nonetheless, both states have experienced healthy declines in their year-over-year construction unemployment rates.

West Virginia held at the third highest construction unemployment rate in March. Although the rate did decline from February, it was significantly higher than in March 2014. The year-over-year increase (+3.2 percent) was the largest among the nine states that saw an increase compared to last year. Louisiana, with a 2.4 percent year-over-year increase, was the second highest and the only other state with an increase in excess of 1 percent.

Georgia, which had the 16th highest (35th lowest) construction unemployment rate in February, moved into the bottom five to fifth highest in March despite the 1.1 percent decline in its year-over-year rate. Georgia’s relative standing may be largely a result of improved weather in many northern states allowing construction to proceed with its usual seasonal rebound in those states rather than a basic change in Georgia’s fortunes.

View each states' unemployment rate for all industries