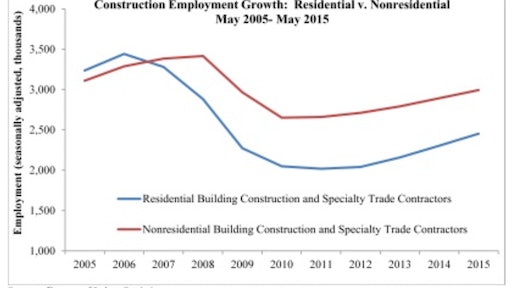 "The increase in nonresidential construction employment was solid but unremarkable," said Associated Builders and Contractors Chief Economist Anirban Basu. "While some would interpret that as due to a lack of increase in demand for human capital, recent sharp increases in industry wage rates suggest that construction firms are experiencing greater difficulty locating and securing properly skilled and credentialed workers. The industry may have added more workers were human capital more readily available. Construction industry unemployment sank from 7.5 percent to 6.7 percent last month marking the second lowest industry unemployment rate since November 2007.

"The tightening of the labor market should come as little surprise as the broader economy has averaged nearly 255,000 net new jobs added per month over the past calendar year," said Basu. "The economy has added private jobs for 63 consecutive months, the longest such streak in American history. ABC expects wage pressures to build in the construction industries and the broader economy over the next year. That will produce a combination of positive and negative effects, including stronger consumer spending and rising interest rates.

"Among the report's most positive aspects was the significant entry of new job seekers into the U.S. labor market," said Basu. "Broader participation in the economic recovery is critical to achieving three percent growth or better going forward."