As part of the expansion of the Riva GmbH factory in Backnang, a Wirtgen WR 200i soil stabilizer joined forces with two Hamm compactors and a Streumaster SW 16 MC binding agent spreader to stabilize the soil 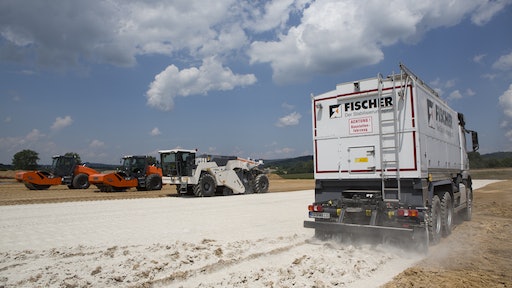 Running like clockwork … the Streumaster SW 16 MC spreads the quicklime, the Wirtgen WR 200i works the binding agent homogeneously into the soil and immediately behind them the two Hamm H 20i rollers compact the soil.

Riva GmbH is on a growth trajectory. The consulting engineers, who have made a mark in Germany with the restoration of the Berlin Reichstag and the design of Potsdamer Platz, among other projects, are primarily involved in designing building façades for export to Arab countries, particularly for the Saudi royal family.

Following major new orders, the production hall of around 9,000 m² – which Riva GmbH had only moved into in 2012 – was already too small. This prompted the firm to build an additional production hall with a surface area of 15,000 m² as well as an administration building, both projects to be completed by the end of 2014.

Unfortunately, however, the load-bearing capacity of the soil on the earmarked site was insufficient. Karl Fischer GmbH & Co. KG, the company from Weilheim an der Teck commissioned by Riva GmbH to carry out the earthworks, had a choice: either remove the soil on the 50,000 m² plot and replace it, or stabilize it in layers.

In consultation with the client, Project Manager Max Bachteler of Fischer Weilheim opted for the simplest and also the most economic solution – soil stabilization using Wirtgen Group technology: "Processing the existing soil not only saves us the considerable cost and time of replacement, it also delivers a high-quality base with an adequate load-bearing capacity." And the perfectly coordinated team of Streumaster binding agent spreader, Wirtgen soil stabilizers and Hamm rollers was more than up to challenge of moving some 100,000 m³ of earth.

As ever, it was Streumaster that kicked things off, this time with the SW 16 MC binding agent spreader. Mounted on a three-axle truck, the module unit has a binding agent container capacity of 16 m³. Its high performance and simple loading system using a quick-change coupling allow up to ten silo loads of binding agent to be handled each day. A total of 6,000 t of binding agent were spread in Backnang. The spreading and distribution of the binding agent – in this case quicklime – are controlled electronically. The intelligent control coordinates the conveyor chain, transverse augers, metering feeders and control terminal precisely, allowing excellent spreading accuracy to be achieved. The unique self-cleaning effect of the rotary vane feeder means that both precision and performance can be maintained throughout the project. The integrated automatic dust-collecting filter system permits dust-free loading of the spreader so that neighbouring buildings and vehicles do not become soiled.

To mix the binding agent into the soil, Fischer selected the Wirtgen WS 250 tractor-towed stabilizer. Fischer has three complete Wirtgen units and three Streumaster binding agent spreaders in its fleet. The advantages of the WS 250 are obvious: it can be connected to a tractor in just a couple of operations, converting a simple tractor unit into a "stabilizer" in a matter of minutes. The Wirtgen WS 250 is particularly suitable for small to medium construction projects.

The greater the surface area, however, the more powerful the machine must be. It was this consideration that prompted Fischer Weilheim to try out the Wirtgen recycler and soil stabilizer WR 200i as well. It is the "compact" member of the new WR generation from Wirtgen and, like the whole series, features an impressive combination of high performance and mixing quality, optimum off-road manoeuvrability, numerous automatic functions and perfect ergonomics. Holger Merkle, a foreman at Fischer, was impressed: "The spacious cabin gives you very good all-round visibility and operation is intuitive. This gives every driver optimum control over the working process at all times."

The WR 200i mixed the soil homogeneously with the spread binding agent down to a depth of 50 cm. The soil-binding agent mixture produced offers high tensile, compressive and shear strength as well as lasting water and frost resistance and volume stability. With its 435 HP, the WR 200i achieves daily soil stabilization performances of up to 8,000 m², operating at a width of 2 m and a depth of up to 50 cm. Project Manager Bachteler was satisfied with the results of the test: "Despite the high performance, the machine is very economical thanks to the low fuel consumption. The quality of the stabilized soil also impressed me."

Finally, it was the turn of the earthworks professionals: two compactors from Hamm ensured optimum compaction. While the H 20i with padfoot precompacted the soil, the H 20i saw to the finish. With their 3-point swivel joint, the compactors demonstrated the customary outstanding manoeuvrability alongside optimum drive stability. The results were outstanding and fitted seamlessly into the work of the other machinery.

Looking back, Bachteler from Fischer Weilheim takes a positive view of the project in Backnang. "The job was completed successfully and on time thanks to well-planned logistics, properly coordinated work processes and the right machinery," said the project manager.