One Australian company is repurposing toner ink for use in asphalt mix design. 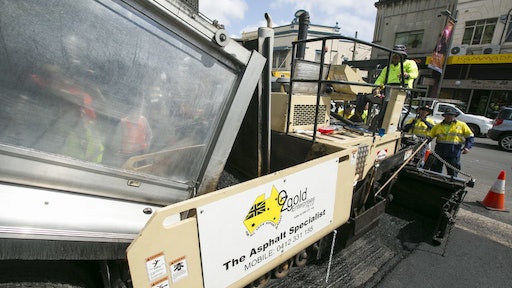 The City of Sydney’s first street was laid with TonerPave on September 16th, 2014.

Did you know that the ink in your printer is considered one of the most expensive liquids in the world? If you were to fill up your standard 15 gallon gas tank with printer ink, it would cost you almost $75,000. Ouch.

Once your printer runs out of ink, consumers (hopefully) recycle the cartridges, which leaves millions of them forgotten in landfills. Inside those cartridges, it’s estimated that there is still 13% of unused ink just sitting there going to waste.

Enter the asphalt industry, king of recycling, to make good use of those old cartridges. This time, it's an Australian company, Downer Group, who has been working to re-purpose this leftover toner powder for use in asphalt mixes.

The material inside your toner cartridges is actually a small plastic powder material that is melted down when printed on to paper. When the waste toner is recycled, its low melting point makes it an effective glue in asphalt. This can reduce the use of oil-based bitumen.

TonerPave is the result and it's made by adding MTP (Modified Toner Polymer) to standard asphalt. The toner is blended with recycled oil and is 40% more energy efficient than the manufacturing of standard bitumen, with a relative saving of 270kg of CO2 emissions per ton.

Every ton of the toner-based product used in the asphalt mix replaces 600kg of bitumen and 400kg of fine aggregates, such as sand and soil. Almost 100 toner cartridges are needed to make 1 ton of asphalt.

TonerPave Put to the Test

“We have these toner cartridges and the challenge is to do something with them,” says Peter Tamblyn, marketing manager at Close the Loop. “This is the only commercially viable waste toner solution on the planet, it’s a good thing.”

Currently, the product, called TonerPave is being extracted from cartridges in Melbourne and then transferred to Sydney where it’s being blended and placed as tests on roadways.

The City of Sydney’s construction services manager, Andrew Christie, said the product must prove as resilient as regular asphalt and have the same 30-year lifespan. “In two or three years we should have an indication if it is a good alternative to traditional asphalt. Hopefully we can start to use it across Australia,” he said.

At $150 per ton, the mix costs the same as standard asphalt, but Christie expects this to drop as the product matures. Raw materials represent a small portion of road resurfacing costs, he said, which is mainly taken up by machinery and staffing.

However, this is the first time TonerPave has been combined with warm mix asphalt, which has been in use in Sydney since 2010. Warm mix asphalt is heated at temperatures lower than regular asphalt and saves the city 24,000kg of CO2 emissions each year.

Christie says 30% of this new mix is also comprised of recycled asphalt, significantly higher than the industry requirement of at least 10%.

The measure is part of the City of Sydney’s target to reduce its greenhouse gas emissions by 70% by 2030. It was the first local council in Australia to be certified carbon neutral under the National Carbon Offset Standard.

All of Australia’s waste toner powder could theoretically one day be used in asphalt mix, Tamblyn said, but many people throw their toner out rather than recycle it.

“If we could get our hands on all of Australia’s waste toner we would happily use it,” he said.

Tamblyn says “the rest of the world is looking at this” as the company begins investigating importing toner waste from overseas markets.

Lack of maintenance has caused our Interstate system to deteriorate more rapidly than necessary according to the latest TRIP Report.
Jessica Lombardo
June 22, 2021
Follow Us