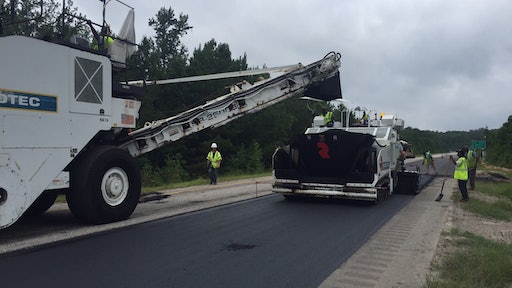 Delta S was used to pave test section (N7) at the National Center for Asphalt Technology track. They used a very aggressive mix design of 25% RAP (upper fail temp 110°C) and 5% RAS (upper fail temp of 189°C) along with a 67-22 virgin binder. Delta S was dosed at 10% to the recycled binder content.

The primary cause of failure in a pavement is oxidation. Asphalt binder, which is the material used to keep aggregates together, weakens over time, becoming brittle and breaking apart. Water then penetrates into the asphalt base, causing it to shift and settle, leading to further cracking and depressions in the surface.

This oxidation process is what the team at Collaborative Aggregates sought to change.

“The Massachusetts DOT was looking for an environmentally friendly product that allowed them to use higher percentages of RAP and RAS in their mix design,” says Jay Bianchini, vice president of operations at Collaborative Aggregates. “The principles of green chemistry required us to ensure that any rejuvenator we developed was sustainable. From the very beginning, that was our goal. It was just a matter of developing a formulation that truly rejuvenated aged binder and met our green initiative.”

The result was Delta S, an asphalt rejuvenator that was designed to chemically reverse the oxidation that takes place in asphalt as it’s heated at the plant and subsequent aging after it’s been paved.

“The key here is that it was designed to chemically reverse the oxidation,” Bianchini says. “There are a lot of rejuvenators out there that simply softens the aged binder. Other products came about as a waste material that companies wanted to turn into a commodity product, so again, they do not chemically alter the aged binder.”

Delta S is environmentally friendly, worker safe and all the components come from renewable feed stocks. Oxidation is reversed through a carrier matrix which solvates aged asphalt in order to allow the antioxidant properties of the suspended small molecules to react with the oxidized components of the aged binder. That allows their antioxidant properties to reach the damaged elements and ameliorate their effect on the final pavement product.

Just like any other additive, Delta S can be added into the binder before mixing or directly to the recycled material.

“Since the idea is to recycle aged binder, we often suggest dosing directly to the recycled material, to ensure the target of interest is receiving the maximum dosage,” Bianchini says. “Experiments have shown, however, that performance does not differ to a meaningful extent with pre-dosing, so the choice of application method should be largely driven by customer convenience.”

Unlike other products though, Delta S can be introduced at any point in the production of pavement: it can be added to the binder in the asphalt storage tank, where it will remain incorporated in the asphalt without ongoing heating or agitation, applied through a spray bar over the belt or bin for whichever recycled product is being used/treated, it can be in-line blended with the liquid asphalt using an injection system (such as those used for liquid anti-strip aids or latex, or a basic pump skid) and it can also be sprayed directly into the plant through its own metered injection port.

“Delta S has successfully been introduced through every method commonly used in the trade,” Bianchini says. “Delta S has been tried and shown success with both RAP (upwards of 45%) and RAS (upwards of 5%). The dosage rate differs, however, due to the greater stiffness of RAS binder. The purpose of rejuvenator use, in our view, is to produce pavement that meets or exceeds performance targets for high-quality engineered mixes, and to do so in an economical and environmentally conservative way.”

This product is not only good for the asphalt it’s helping to keep in prime performance, it’s also good for the environment, your crew and those around the paving process.

“Reducing the chronic exposure of paving crews to carcinogenic or otherwise harmful compounds by replacing the elements you feasibly can with safer alternatives is the responsible thing to do, both on a human level, and in terms of reducing long-term costs to society,” Bianchini says. “In terms of greater environmental impact, increasing the amount of recycled content you can use, and increasing the lifespan of pavement, reduces the consumption of non-renewable resources, so the more effective a rejuvenator is, if it is itself produced from renewable sources, the lower the environmental footprint of paving a given roadway will be.”

In addition, Bianchini says it isn’t just your workers that can be exposed to material used in the production of pavement. “Those nearby during production, or even thereafter, should be spared any unnecessary harmful exposure. Bianchini says. “Every time water rolls off the top or makes its way through pavement, it is worth considering what it may be taking with it.”

Delta S has just been paved on a test section of the National Center for Asphalt Technology track.

A New ERA in Asphalt Production