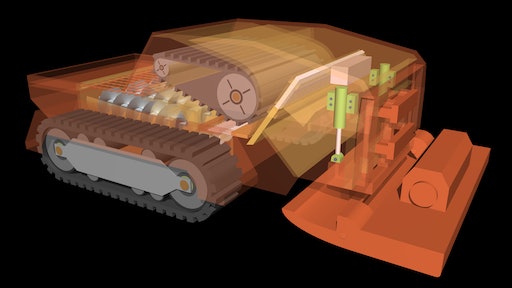 On October15th, Advanced Paving Technologies Inc. (APT) launched a crowdfunding campaign to generate $60,000 for what it expects to be the first step in bringing what the company terms a “3D asphalt paver” to the market.

Still in the research phase, the paver is called the Multi-dimensional Asphalt Delivery and Compaction System (MADCS) and will be intended for paving overlays, not for new construction. “Informally, it is the world's first 3D asphalt paving machine,” according to APT.

John Smith, CEO, said the $60,000 will fund core research and development on MADCS. APT is working in conjunction with Dr. John Harvey and his team at the University of California-Davis, where research funded by this crowdfunding campaign will be performed.

“Our stretch goal is to do the mechanical engineering for the 3D paver and the final design for a prototype,” Smith said. “Once we get positive results from our research we can then reach out to capital investors to finance and build a prototype.”

What 3D Paving is Trying to Solve

According to APT, current pavers that rely on screeds that have only a single flat surface, which can’t compensate for the bumps, dips, depressions and ruts found in most roads. For example, if used to overlay an existing surface that has typical depressions or ruts, and without any preparation work, APT says current pavers deliver too much material over the bumps and not enough material over the depressions, resulting in what is commonly referred to as differential compaction.

Smith says that to compensate for this the industry currently has no choice but to turn to pavement milling, which does even out the surface to be paved.

“Unfortunately, this method reprocesses 100% of the road surface to address a much smaller percentage of problem areas. Structurally, nothing is wrong with the majority of all asphalt that is reprocessed in this manner. This process is very time consuming and costly as well as greatly contributing to the carbon output of the project. It also causes more and longer lane closures, which adds to traffic congestion and causes even more carbon output. Often it is milled for no other reason than to provide a uniform flat surface for current 2-D asphalt paving machines to be effective.” The industry rightly calls this practice a “recycling” effort, however it is anything but a green process.

How the 3D Paver Works

The MADCS uses a remote sensing technology (LIDAR) that essentially bounces a laser off a target (in this case the pavement surface) and analyzes the reflected light. Smith says this scanner, when combined with APT’s new asphalt paver design, will be able to scan a road surface, map out its defects, and then design and deliver “on the move” a shaped asphalt mat that provides a smooth and long-lasting pavement surface.

“Mapping the surface is only part of the solution. The other part is that instead of using today’s typical flat screed we will be using a multi-segmented variable screed that incrementally delivers asphalt material across the entire width of the paving pass,” Smith said. “The variable screed works completely different from current screeds that measure and provide initial compaction of the asphalt material at the same time. Instead we first form an overly thick uncompacted layer of asphalt that is then introduced to the variable screed, which incrementally strikes off the unneeded material, leaving only the asphalt required to form the 3D-shaped asphalt layer.”

He said the individual blade elements of the variable screed do not move straight up and down, as that would distort the oncoming asphalt layer. Instead, the plurality of screed blades are held at an angle in order to bisect the oncoming layer of asphalt and minimize distortions.

Smith said the excess material moves up and out of the inner chamber and comes into contact with a return conveyor that grabs the excess material and delivers it back to the feed hopper, to be reintroduced back into the system. The shaped asphalt layer immediately comes into contact with an angled vibratory sled positioned at the back of the paving machine to compress the high spots into the depressions they are designed to address. Final compaction is performed by a typical heavy roller to form the designed smooth planar surface.

“That will enable us to deliver an asphalt mat that accounts for and corrects any surface irregularities underneath and provides a smooth even wearing surface on top. And we can do that without having to mill the entire surface.” In essence this method utilizes the effects of “differential compaction” and uses it in a positive way.

He said under ideal circumstances the company is looking at roughly a three-year timeline to bring the unit to the market.

At National Pavement Expo, Jan. 27-30 in Charlotte, NC, Guy Gruenberg, Grow Consulting, will present "How to Use Today’s Technologies to Manage Your Contracting Business," outlining the variety of technologies available to help contractors improve them management side of their business. According to the description, "You’ll learn about the new and different ways contractors are deploying technology to win contracts, reduce costs, and generate more profit. Technologies covered will include lead generation through online research, customer tracking with CRM, job costing with integrated spread sheets, data collection and analysis, aerial measuring, and how to create compelling proposals. Plus learn how digital photography and video are instrumental in communicating and cataloging what happens on your jobsites. This seminar won’t solve all your technology problems but it will open your eyes to new cost-effective tools that will improve the management side of your business – and your bottom line."