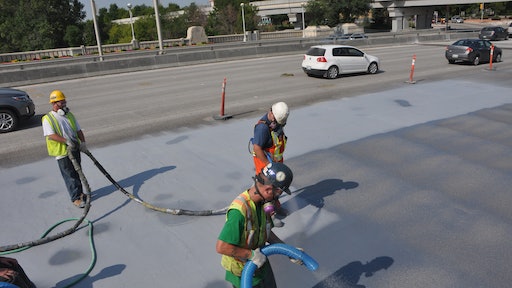 A recent 60 Minutes TV broadcast called “Falling Apart” explains that “America’s roads, bridges, airports and rail lines are outdated and need to be fixed” due to decades of neglect.

The broadcast goes on to state that “nearly 70,000 bridges in America – one out of every nine – is now considered to be structurally deficient” and that according to the American Society of Civil Engineers, “32 percent of the major roads in America are now in poor condition and in need of major repairs.”

The problem with much of America’s infrastructure is that it has outlived its intended service life, and a failure of traditional waterproofing coatings has led to a significant corrosion of structural elements, including corroded rebar and crumbling concrete.

“Spray applied waterproofing now accounts for over 50% of the membranes applied to our bridges,” says Alexander Bardow, P.E., MassDOT’s State Bridge Engineer, member of AASHTO’s Subcommittee on Bridges and Structures representing Massachusetts, and past President of Boston Society of Civil Engineers Section of ASCE.

“What drove us to spray applied waterproofing is its enhanced durability, bonding to concrete, and crack bridging ability,” says Bardow, who oversees and helps to prioritize work on 5,000 bridges that receive federal funds for MassDOT.

Bardow explains, “If cracks form due to deck deterioration or traffic loading, then water gets into those cracks and the concrete matrix.  The [underlying] membrane must be pliable enough to accommodate these cracks without failing.”

While traditional methods of waterproofing such as emulsions, sheet goods, or non-elastomeric coatings like epoxies and paints have long been used, they have significant drawbacks and must be continually inspected and maintained over time.

According to Bardow, in past decades MassDOT utilized mopped emulsion reinforced with fiberglass fabric for bridge decks, then later turned to sheet goods.

“Our experience showed that reinforced emulsion was not a good deck waterproofing system because it debonded,” says Bardow.  “Water could get underneath it and into the deck.  We turned to prefabricated sheet applied membranes.  These were easy to apply, but we wanted more durability.”

As for non-elastomeric coatings like epoxies and paints, these do not have the elasticity to bridge cracks, and are moisture resistant rather than truly waterproof.

“Spray applied waterproofing membrane is the next step after sheet membrane,” says Bardow.  “It gives us better performance and has measurable performance characteristics that we can count on for extended deck life.”

“We expect spray applied waterproofing membranes to last about 30 to 50 years,” he adds.  “We would still repave and resurface the asphalt overlay, but would not need to do anything to maintain the underlying waterproof membrane during that time.”

Since crack bridging is critical in ensuring long-term waterproofing protection, many owners are requiring the ASTM C-1305 crack bridging test for liquid-applied membranes.  The test consists of applying the membrane system across two concrete blocks with matching faces.  The test sample is then brought down to -15° F for 24 hours to stabilize it at this temperature.  The testing requires the two blocks be pulled apart at a rate of 1/8”/hr to a maximum opening of 1/8”, then closed to a zero gap at the same speed.  The test fixture must maintain the sample at the -15°F temperature through the ten cycles of testing required.

Some manufacturers have conducted this test for additional cycles to further test the limits of their products.  For instance, Bridge Deck Membrane (“BDM”) by Bridge Preservation passes the ASTM C 1305 test after 40 cycles.

Some spray applied elastomer waterproofing systems have coefficients of linear thermal expansion similar to concrete and steel, the most common bridge building materials.  This physical property is an important prerequisite to ensuring success when membranes are used as a composite with layers of asphalt.

“Instead of traditionally sealing bridge decks every five years or so, they could be spray applied waterproofed with materials like BDM that can last five decades or more,” says Traci Micucci, President of Eastern Bridge Works, a Poughkeepsie, N.Y.-based waterproofing contractor.  “That would eliminate repeatedly tearing up the asphalt overlay, resealing the deck and repaving it, plus all the required lane closures.  It would stop rebar corrosion and concrete spalling in decks to keep infrastructure safely operating.”

These spray applied membranes can be sprayed horizontally, vertically and overhead at any thickness, as well as applied at specified thickness in one continuous application.  Spray applied waterproofing can also be applied robotically with greater speed and consistency than other materials.

“By robot, we can consistently spray apply waterproof over 10,000 sq. ft. of deck per day with BDM at 80-85 mils on any surface,” Ted Predki, Chief Estimator and Project Manager at Pine Waterproofing and Sealant.  “It’s easy to high-build spray it in one coating.”

A CDOT project in downtown Chicago, recently completed by Pine Waterproofing, involved applying 65,000 sq. ft. of spray applied waterproofing and needed to be returned to service as quickly as possible.  The concrete surface had an extremely rough surface, but BDM was still able to achieve a superior bond.  The contractor was able to install over 30,000 sq. ft. of 80 mils BDM and 40 mils of top coat with aggregate within seven days, and completed the job within four weeks.

In critical, high traffic highway and rail bridges, the speed of installation and return to service is a particular advantage that minimizes downtime.  Some products, such as BDM, can accept ballast, temporary traffic, other trades, or asphalt overlays one hour after application.

To further illustrate the importance of installation speed, many in the industry are utilizing spray applied waterproofing as a standard accelerated bridge construction material.  The accelerated bridge construction process involves using prefabricated bridge elements and systems such as composite decks manufactured off-site, which are then installed with closure pours and then appropriately waterproofed.  This expedites the project, improves quality, reduces traffic impact, and lowers total life cycle costs.

“When we did the Metra Fast 14 project, we had to complete a bridge project in essentially one weekend, explains MassDOT’s Bardow.  “Within than time, we had to demolish the existing bridge, set prefabricated bridge units for the new bridge, do all the closure pours, have the concrete set, then come back to spray apply waterproofing membrane.  The contractor accomplished this, and the speed of spray applied membrane installation was an important factor in meeting the accelerated deadline.”

Bardow says that a spray applied membrane is standard for accelerated bridge construction for MassDOT projects.  “With the large number of closure pours we do, we were also concerned about effectively waterproofing them so water intrusion does not become a problem over time.”

Protection board for railroad bridges is another area of recent innovation.  Integrated Ballast Mat, a spray applied ballast mat also developed by Bridge Preservation, provides seamless, high build protection of the waterproofing system with a secondary ballast protection course, as well as providing additional waterproofing protection and enhanced electrical resistivity.  It passes the North American Ballast Impact Test, and can accept ballast loading one hour after application.  For flat decks it can also be applied at varying thickness to provide slope for drainage.

For highway bridge projects that involve complicated staging and traffic management, some spray applied waterproofing systems with an aggregate top coat can be used as a temporary driving surface for up to two weeks.  This allows large areas of waterproofing to be applied prior to paving, and reduces the number of cold joints for a more durable final wear course.  The aggregate top coat also enhances the bond between the membrane and asphalt, adding further long-term performance to the finished system.