Driverless Cars are 5 Years Away. Are You Ready to Upgrade Smart Roads? 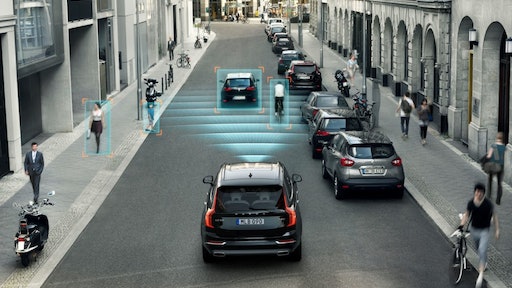 New research suggests that children born today will never drive a car. The auto industry's embrace of self-driving technology has been accelerating fast and those technological advances mean that by the time today's toddlers come of age, they'll likely never even have to get behind the wheel of a car, according to Henrik Christensen, the director of the University of San Diego’s Contextual Robotics Institute.

So what does that mean for our roads? Upgrades. And sooner rather than later.

“This transition is happening a lot quicker than we anticipated,” says Ronique Day, a government transportation analyst in Virginia, one of several states studying ways for roads and cars to communicate.

Other states across the country are following suit, installing digital signage above lanes that will aid in communication when self-driving cars become an everyday reality.

The signs are a first step toward what highway planners say is a future in which self-driving cars will travel on technology-aided roads lined with fiber optics, cameras and connected signaling devices that will help vehicles move as quickly as possible—and more safely.

While concrete and asphalt have long been the simplest solutions to easing congestion or meeting the need for extra road capacity, these technological advances have created new opportunities for addressing challenges. What that means is that we are going to have to figure out how to begin developing a smarter highway.

So far, the infrastructure behind these autonomous vehicles is lacking, having been built into just a few miles of highway in a handful of states.

How Will it be Done?

So how are states handling this? The first step will be deciding how to communicate with cars as an array of auto makers and tech companies independently have developed autonomous-driving technology. No common standard has been established for how a new generation of smartcars will receive information from smart roads—or how they will handle alerts once they get them.

Policymakers looking for blueprints on designing smart highways should look to the states that are currently piloting studies on their roadways like Virginia, California and Utah.

Utah is undertaking a test of the technology on a stretch of Salt Lake City’s Redwood Rd, a major north-south commuter route. Sensors on traffic lights connect to public buses and can adjust red and green signals to help buses stay on schedule.

But highway researchers say their biggest hurdle is ensuring they have technology that can work.

Road connections to cars have mostly used dedicated short-range communications, or DSRC, a wireless link commonly used in transportation systems to manage stoplights and tolling. But researchers say the industry may settle on cellular-data systems used for smartphones or WiFi if the technology can handle information more rapidly and reliably.

Virginia has strapped one-foot-square DSRC devices on light poles and bridges on various roads, including Interstate 66 outside Washington, D.C. The gadgets watch the highway and allow workers at a central-control site to change recommended speeds lane-by-lane depending on traffic and communicate that to drivers with the signs mounted over the highway. They also send messages to state government road-maintenance vehicles about traffic flows and road conditions.

Those emergency messages will be communicated on electronic boards on many highways and would arrive through a smartphone-like app that displays alerts on drivers’ dashboards. The sensors can then monitor traffic flows and see that wheels are losing touch with the road as a rainstorm builds. The signs can lower the speed limit for the current situation and the road devices could alert cars miles away to slow down or even give them new routes to their destinations.

Planners say billions of federal dollars will likely be needed to wire the nation’s more than 4 million miles of paved roads and 250,000 intersections and with many states struggling to cover basic highway maintenance, this infrastructure seems far fetched.

Right now, it seems car manufacturers have put the cart before the horse in developing autonomous vehicles before the infrastructure to support it is ready. Still, we hope this means funding for this type of work and plenty of jobs for contractors in 2017 and beyond.