How to Choose the Best Heat Source for your Asphalt Plant

Keep current with heating choices at your asphalt plant 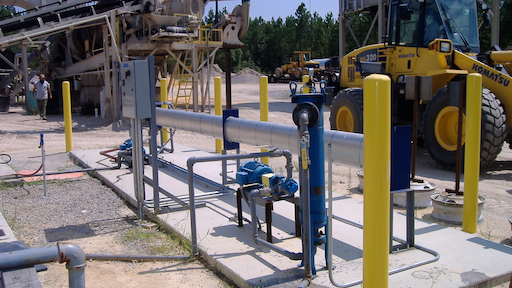 There’s no getting around the fact that asphalt plants consume a lot of energy. And energy choices, especially as they relate to producing heat for asphalt, hot oil and the drying/heating of aggregates, can have a significant impact on the overall operating costs of an HMA plant. Operators often make energy choices for heating their plant’s components based on current energy pricing trends. But the cost of natural gas, LP gas, fuel oils and electricity have all fluctuated over the years.

There was a time when fuel oil was the low-cost leader. A decade ago, electricity became far cheaper than fossil fuels to use for heat. Today, the least expensive form of energy for heat seems to be natural gas. But producers often overlook the fact that their energy choices create impacts that go beyond operational costs, and what seems to be a simple challenge actually requires additional considerations to reach optimal efficiency. When choosing an asphalt heating method, it’s important to look at the entire picture. Cost-per-unit of energy to heat asphalt and oil is certainly part of the puzzle – but it is not the only cost. Also important is the heater’s thermal efficiency. A small difference in efficiency can make a big difference in how much fuel a heater burns over its lifetime.

It is widely accepted that most fossil-fuel-fired burners operate at 80 to 85 percent efficiency when new. On its best day, a burner is wasting 15 to 20 percent of its heat – which goes into the air as exhaust and burner emissions. As the burner ages, its efficiency drops. And because fuel-fired asphalt heaters are maintenance-intensive, if they are not properly maintained and tuned to keep their efficiency up, their efficiency drops even more significantly. In fact, by the time the burner is 7 to 8 years old, a fossil-fuel burner’s efficiency can easily be at only 50 to 60 percent, meaning that up to 50 percent of the heat is wasted – going into the air as exhaust.

In comparison, an electric-powered asphalt tank or hot oil heater operates at 100 percent efficiency from day one – 100 percent of the heat is applied to the product, with no heat or emissions exhausted into the air. And over the lifetime of the heater, the electric efficiency never drops.

The table below shows a recent fuel cost comparison between different forms of energy per 1 million BTUs, which is the approximate number of BTUs required to maintain 30,000 gallons of asphalt cement at 300˚ F over 24 hours in a tank with 3 inches of insulation.* 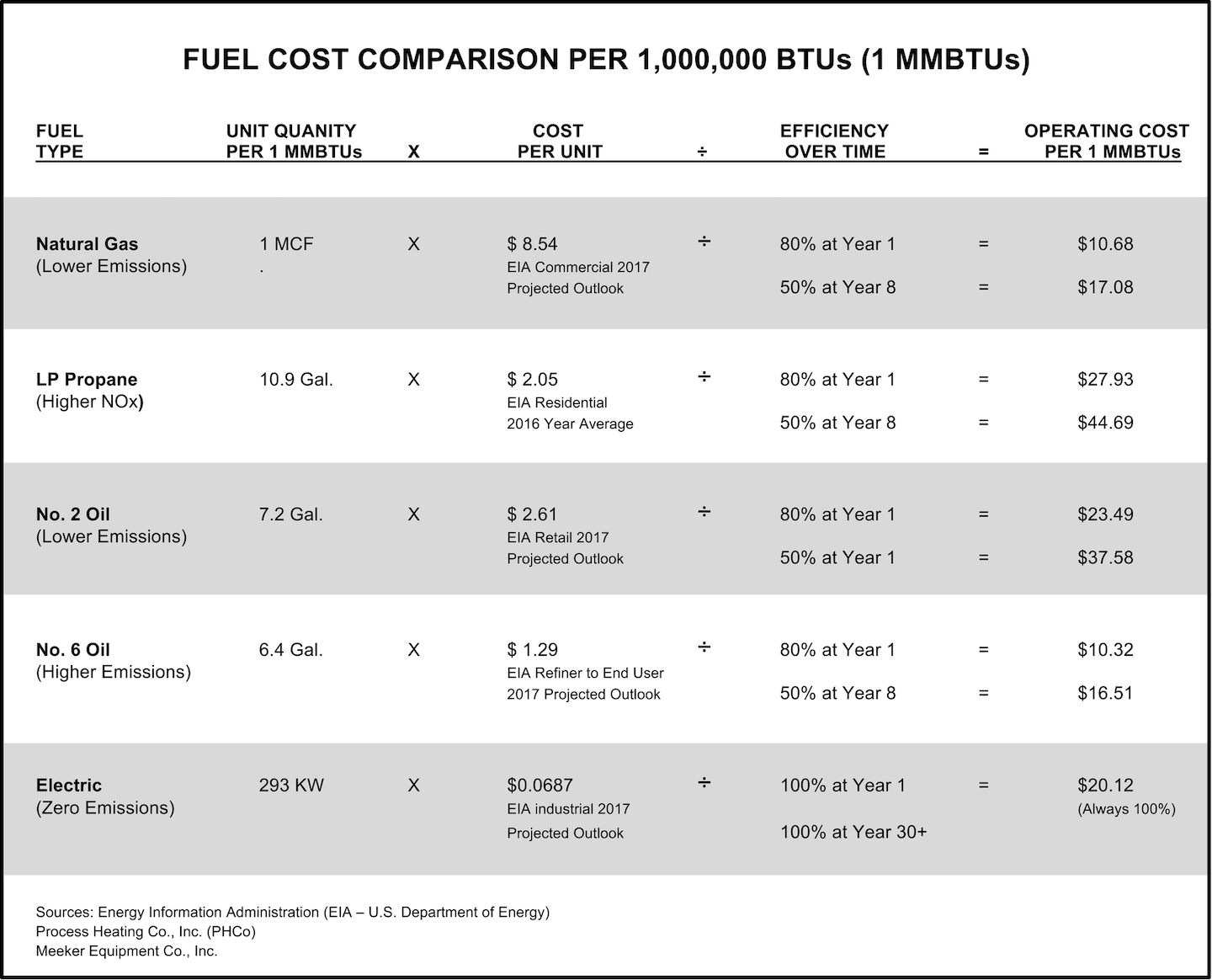 In an initial assessment, it would seem that No. 6 oil, followed closely by natural gas, are the cheapest forms of heat energy. But we already know that fossil-fuel burners operate at only 80 to 85 percent efficiency at best – and their efficiency drops dramatically over time. The far right column in the table shows the cost of applying various energy forms over time, with true efficiencies taken into account, along with aging burners and poor maintenance practices. Keeping in mind that electric heaters operate at 100 percent efficiency throughout their lifetime, it is clear that the energy cost gaps begin to close.

Process Heating Company (PHCo), a manufacturer of electric heaters for asphalt plant products, has performed tests to find the specific costs accrued in heating asphalt and hot oil with electricity. The tests included asphalt storage tanks and a hot-oil system at a 500-ton drum mix plant that produced 2,400 tons per day. The asphalt tanks were well-insulated, holding 20,000-gallons of asphalt cement at 340˚ F.

It should be noted that the plant where testing took place was in excellent condition, and the tanks and hot oil system were well-insulated. In order to achieve optimal electric rates, the equipment was interfaced with other large electric-using equipment to avoid adding to demand charges. Additionally, the electric heaters utilized time clocks for operating during off-peak hours, to take advantage of lowest possible rates without impacting performance or operation of the plant.

At current industrial electricity costs of $0.0687 per kW, a 140 kW heater running 4 hours per day (summer) would accrue $38.50 in daily costs, and 6 hours per day (winter) would accrue $57.70 in daily costs. Alternately, with diesel fuel costs of $2.61 per gallon (based on EIA projected outlook in Table 1), daily asphalt heating costs would total the following: 20 gallons of diesel fuel (summer) at about $52 per day and 27 gallons (winter) at about $70 per day.

Electric heaters are simple to install in most asphalt plants, with a complete installation of the heater, plumbing, piping and electrical hookup completed one or two days. They not only provide 100 percent efficient heat, but they also require little to no maintenance, further reducing a plant’s operating costs. Because they typically last more than 30 years, electric-powered plant heaters also enjoy a lifespan that lasts 3 to 4 times longer than fossil-fuel burners, which must be replaced every 8 to 10 years – reducing capital costs.

Better product quality is another benefit to using electric heat. Low watt density heaters, which dissipate controlled heat as low as 3 watts per square inch on the heater’s sheath, can prevent the coking and damaging of temperature-sensitive materials that often occurs with fossil-fuel-fired burners.  In hot oil systems, this reduces or eliminates the need to change out expensive heat transfer oil.

With increasing emission regulations, electric heat eliminates some need for expensive permits because it creates zero emissions. One plant operator in California recently noted that adding a single stack at his plant would increase his annual permit cost by $5,000-$6,000. As shown in Table 1, No. 6 Oil produces high emissions. This type of fuel also often requires pre-heating, and typically must use special burners. LP propane gas produces greater levels of NOx. And while today’s No. 2 Oil (also known as heating and diesel oil) produces lower emissions than it has in the past, that energy source, as well as natural gas, both create some level of emissions at the plant – with associated stacks, permits and expenses.

Best of Both Worlds

With almost constant fluctuations in energy costs over the years, some producers have found it beneficial to install both electric heaters and fossil-fuel-fired burners for their hot oil and asphalt cement. This setup is not difficult to achieve, and the installation of the electric heating system easily runs side-by-side with the fossil fuel heating system. The dual heat options then allow the producer to take advantage of the lowest energy costs available, and also provides a backup if a system breaks down or there is a power outage.

One South Carolina asphalt producer installed a dual system several years ago, when fuel prices rose to more than $4 a gallon. The company, which had previously used diesel-fuel-fired hot oil heaters exclusively, chose to add a PHCo electric hot oil heater at a 200,000-tons-per-year facility. During the period when fuel prices were high, the electric-powered heater allowed the company to cut its asphalt-heating costs considerably. The producer opted to keep its diesel-fired heater, as well, so that it may switch between the two, depending on which system is providing the most cost-effective heat.

Before you hire a construction lawyer ask these 10 questions to make sure they have the experience and are the best fit for your needs.
Alex Barthet
Feb 12th, 2020

Construction is among the industries that have so far claimed the largest amount of forgivable Paycheck Protection Program loans. The extended program is still looking to disburse $130B in aid.
Larry Stewart
Jul 8th, 2020
Latest