IC technology proved its value for the company on a $2 million, nine-mile-long, single lift overlay job to be completed in 55 working days 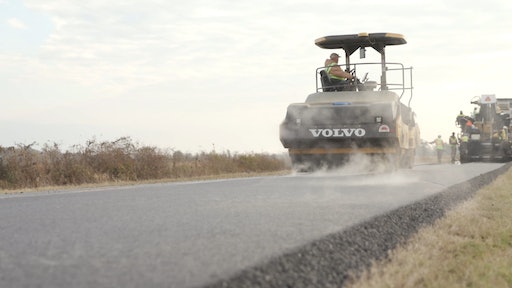 With 9 miles of single-overlay Level 1 Superpave, some of the common challenges for the project were traveling ruts, heavy Louisiana soils and irregular core sample analysis.

Based in West Monroe, LA, the 50-year-old D&J Construction has paved a lot of roads and seen many generations of equipment as they have worked on major interstate jobs such as the I-10 and I-49 in Louisiana. As a NAPA Diamond Achievement Commendation awardee, D&J Construction prides itself on its people — approximately 100 employees — and follows the company motto of “Quality people, equal quality roads.” They also try to stay ahead of the curve when it comes to equipment and technology.

Incorporated in 1967, the company started as a reconstruction company. In the early 1990s, they made the switch to becoming strictly an asphalt laydown company.

“Asphalt laydown has been our bread and butter since the early ’90s,” Jeremy White, asphalt laydown foreman for D&J Construction says. “We produce and lay our own asphalt, and have four asphalt plants in Louisiana.”

Having worked at D&J Construction for 17 years, White has seen the company grow and complete big jobs.

None of it would be possible without the right people, equipment and technology in place. On the technology front, D&J Construction has found a lot of success lately with Intelligent Compaction (IC).

IC technology proved its value during a 2017 job in northeastern Louisiana. D&J won a $2 million, nine-mile-long, single lift overlay job to be completed in 55 working days in the northern part of Franklin Parish, near Mangham, LA, by being the lowest bidder. Louisiana is a low-bid state, so making sure to keep bids as low as possible while remaining profitable is key to any company’s success.

The job specification called for the smoothness index to be the International Roughness Index (IRI) with a density specification of 92 Percent Within Limits (PWL). D&J had to profile the job before beginning and accomplish the creation of a 20 percent better ride at completion, and every core must have at least 92 percent density.

For the first three-mile section of the job, the D&J team put a leveling course down — an inch of asphalt that covered the traveling ruts created by driving patterns — and then came with an inch and a half of Level 1 Superpave, the asphalt mix specified by the DOT. The remaining six miles of the job was a 2-in. overlay with the same Level 1 Superpave.

While the specifications were clear-cut, the D&J Construction team had to overcome some challenges.

Any job may present obstacles along the way, but the Franklin Parish job had a distinct set of demands.

“There are a few unique things about this road,” White says. “The traveling ruts made it difficult for us to get density because of the variations of the road itself with the high and low points. That’s why we did a leveling course. The travel ruts were the main concern on this job.”

Along with the travel ruts, D&J Construction faced bad road beds because of the Louisiana soil conditions. The soil is heavy and presents problems when trying to achieve density.

“The further south you go, and east toward the Mississippi River, the material is very heavy and the road beds are in bad shape. The nomenclature we use here is gumbo mud,” White explained. “When you’re trying to get density, you want something hard to beat against, because the vibration goes through the asphalt and hits whatever is under it. With heavy soils, if it’s dry, you have a lot of cracking. If it’s wet, it moves, almost like peanut butter. It makes it difficult to achieve density no matter what you try.”

“D&J decided to buy the Volvo DD140C roller with Density Direct because they are focused on IC, and they know it’s going to help them improve their quality of work,” Higdon says.

Compact Assist with Density Direct provides real-time pass and temperature mapping, as well as density calculations that are accurate within 1.5 percent of core samples when the system is calibrated to the job’s asphalt mix.

After a demo of the software from Volvo Construction Equipment in 2016, the decision for D&J Construction to purchase the system seemed like a no-brainer.

They waited until they had enough jobs in the queue to warrant getting the system, and then they made the purchase.

The system has exceeded their expectations in many ways, solving several problems on the job site, such as irregular cores, over-compaction and dealing with temperature changes throughout the day.

“Some of the problems we had before we bought the system were irregular cores," White says. "Some cores would be fine, but we were having some problem areas. We knew we were doing everything that we could process-wise, but some of our cores just weren’t passing. With this system, it shows us problem areas where we can go identify with the state DOT and show them we’ve done everything we can do as far as rolling the asphalt — it’s a sub-base or base problem. That’s really helped us.”

John Camp, an operator with D&J Construction for 20 years, has seen many benefits from using Density Direct.

“Density Direct helps me keep up with the changing mix throughout the day with temperature changes, and it helps me coordinate with my quality control engineer,” Camp says. “It also helps keep me from making too many passes and over-compacting the mix. Temperature mapping helps me stay out of the tender zone and keep the mix from cracking.”

The system has also helped D&J Construction cut down on how much the finishing roller gets used on the job site, ultimately reducing fuel costs, over-compaction and wear on equipment.

“The system has allowed us to scale back some on our finishing roller. The fuel consumption and wear and tear on the machine has been our biggest savings so far — probably $4,000 to $5,000 a year,” White says.

The Franklin Parish job wasn’t the first on which D&J Construction used IC. In fact, they used the system previously on a state highway job in eastern Louisiana, where they faced many of the same challenges.

“It worked really well with the heavy soils. We were having a hard time achieving density with the heavy soil. With the system, we could show the state DOT where the problem areas were and that we were actually doing our part and doing all we could with the roller,” White says.

Moving Ahead with IC

Despite the fact that Louisiana is not one of the 23 states which has adopted an IC specification, D&J Construction has found IC useful, making their paving operations run smoothly and helping to overcome any challenges they face while paving in difficult road and soil conditions.

“I believe the state is going to start using IC,” White says. “So instead of cutting core samples, we’ll just go off of what the machine is saying.”

Whatever happens next, D&J Construction is glad to be ahead of the curve.

One fear that many may have with using new technology is that it may not be as accurate as promised. After a lot of testing, D&J knows that once calibrated, the IC system is accurate and reliable.

The calibration process itself takes about 10 minutes and relies on comparing core samples with specified areas of the mat.

“The density calculations have been very accurate with our core samples. After the operator does his calibration and we get those final lab results back and plug them into the system, they nearly mirror the density readings and core readings. Once we get it calibrated, the operator knows that what’s provided by the system is accurate,” said White.

D&J relies on core testing, and sees themselves relying on IC more as time goes on.

“The DOT has a specification, and we have to cut a certain number of cores per every thousands of tons of asphalt we lay,” said White. “But as far as our research cores, the more accurate the system is and the more we learn it, the more comfortable we’ll be trusting the system and just going by the calculations it provides.”

Combine the easy calibration with the two-day training process, and D&J found it easy to get started with IC.