Established in 1916, the No Proprietary Products Rule blocked the use of products that could improve safety and quality on the nation’s major roadways but the overhaul will give states more flexibility 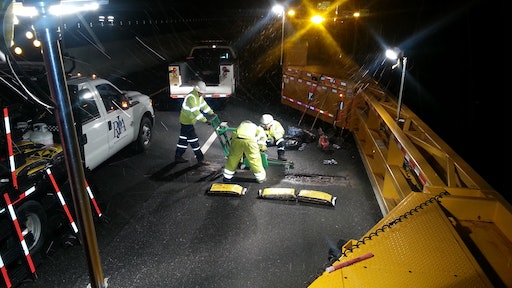 Mobile barriers were designed to keep workers safe in work zones but are not being widely used due to the Proprietary Products Rule.

For over 100 years, states were not been allowed to use "proprietary" products on their federally funded projects. This relic of a regulation stated that "No part of the money apportioned under the act shall be used, directly or indirectly, to pay, or to reimburse a State, county, or local subdivision for the payment of any premium or royalty on any patented or proprietary material, specification, process, or type of construction, unless purchased or obtained on open actual competitive bidding at the same or a less cost than unpatented articles or methods equally suitable for the same purpose.’’

However, the U.S. Department of Transportation’s Federal Highway Administration (FHWA) published an updated federal rule to give states more flexibility and choice in which products or services can be used on federally funded highway projects. The change is intended to improve safety and increase efficiency while saving taxpayer dollars.

“This much-needed update of a century-old, obsolete rule will benefit state transportation infrastructure projects and save millions of taxpayer dollars,” said U.S. Transportation Secretary Elaine L. Chao in a statement.

The rule updates an outdated federal requirement that restricts the ability of states to use patented or proprietary technology in their Federal-aid highway projects.

Prior to this change, federal regulations prohibited state contracting agencies from using federal funds to acquire patented or proprietary materials, products, or services, except under certain limited circumstances.

Background on the Proprietary Products Rule

"The rule's intent was to make it all but impossible for states to use federal aid to use or buy patented or proprietary products, even though those products can enhance safety, reduce congestion and extend the life of the roadway" former U.S. Secretary of Transportation James Burnley with law firm Venable, LLP says. "None of that matters. If it has any intellectual protection at all, the states have to jump through so many hoops to get an exception to use these products that they just don't do it."

Since March of 2018, the American Road & Transportation Builders Association (ARTBA) and Venable, LLP had been working with the Federal Highway Administration (FHWA) to repeal what is known as 23 CFR 635.411.

"The repeal will give states significantly more flexibility in the use of federal aid funds to purchase products from contractors that are innovative and therefore patented or have proprietary protection," Burnley says. "It will encourage companies to innovate and bring those products to the market."

Safety At Core of Repeal

As the number of deaths in our work zones steadily increases year after year, states are challenged with new ways of keeping workers safe. The repeal of the proprietary product rule will help considerably.

"One example of a safety device that protects the workers that isn't currently being used as much as it should be due to this proprietary rule is a mobile barrier," Bunley says. "Instead of state DOT's having to use cones, which are basically worthless in terms of protection, these are moveable barriers that are mounted on truck wheels that can be driven up to a work zone and hooked together to extend the work zone. They create a 5-ft. stainless steel walls that is an impenetrable barrier that protects the workers and their use is being inhibited due to this rule.

"As a practical matter, it's basically impossible for states to use federal aid to purchase these products without going through a lot of steps and delay to get approval," Burnley adds.

Today, there are many examples of new and innovative technologies that could help address the many challenges facing our nation’s highways, but which have not been as widely adopted as they could be, because the proprietary rule had previously discouraged state contracting agencies from acquiring them.

The repeal of this federal procurement rule removes a major regulatory roadblock and spur investment in and deployment of new technologies that promise to help advance safety, alleviate traffic congestion and improve U.S. highways.

"This proprietary rule was an anomaly," Burnley says. "It was out of step with other Federal agency approaches to procurement which allow states to follow their own procurement rules."

Burnley says all other Federal agencies adhere to the OMB regulations of 2 CFR 200.101(b)(3). Now that the rule is repealed, the FHWA aid will be governed by these uniform guidelines just like all other federal aid is which will give states substantially more flexibility.

"Repeal of the Proprietary Rule liberates state DOT’s to use their own procurement procedures to acquire innovative products that will enhance safety, reduce congestion and enhance the resilience of our highways," Burnley says. "Secretary Chao and Administrator Nason are to be commended for getting rid of this 103-year-old impediment to progress.”

States will now have the ability to choose what products they would like to use for their federally funded projects that will work best for their needs.