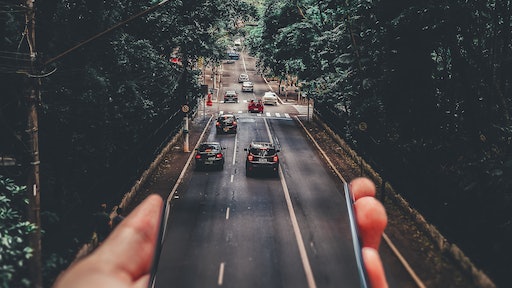 “Roadways can’t just be counted on to do one thing anymore,” Nicholas Webb, CEO of LeaderLogic says. “The future success of the asphalt industry will depend on selling a dynamic product with dynamic value that is not mono-functional.”
Matheus Bertelli/Pexels

Change is inevitable. As much as we’d like to keep building roadways the way we always have, the asphalt industry must adapt in order to remain competitive. While some innovations may seem far away, some technologies are ready to disrupt the construction industry and asphalt contractors need to be ready.

When picturing the coming age of autonomous vehicles (AVs), it’s easy for some people to get stuck on picturing the cars themselves. Their sophisticated sensors, flashy dashboards and roomy cabins have created a well-deserved buzz and interest for humans who’d like to read the paper on their way to work.

In order to stay on the road, avoid collisions and obey traffic laws, AVs rely on a series of sensors that help the cars understand the environment in which they're traveling in real time. By using a combination of ultrasonic, radar, imaging and LiDAR sensors, a digital road map is formed ahead of an AV to essentially help it "see" where it's going.

The problem however, is that this vehicle technology is advancing faster than our infrastructure can adapt. The U.S. Department of Transportation estimates that nearly 65% of our roadways need work and less that 5% of them are ready for autonomous vehicles navigation. Adding to that problem is the fact that as of right now, there are no federal funds specifically committed to getting public roads ready for these self-driving vehicles.

So what are we as an industry to do? Get ready to change, and fast. Here are some ways AVs will change how we build the roads of the future:

Lane Size: Lanes today are designed to account for driver wander and human error. If lanes were designed to the width of an AV, the lane width could be reduced by 20 percent.

Less Signage: Signs and signals are important features of today’s transportation system as they provide drivers with the information they need to keep the transportation system running smoothly. But with the emergence of Vehicle to Vehicle (V2V) and V2I technology, future roadways will not need as many traffic signs and signals as information can be transmitted to AVs wirelessly and in real-time.

Traffic Reduction: AVs can drive more efficiently than humans can so they can ride closer together, reducing traffic and congestion. And since 93 percent of crashes are caused by human error and 25 percent of congestion is caused by traffic incidents, congestion should be reduced even further with AVs.

Road Markings: This is a big one.

“The most important infrastructure element on our roadway system for automated vehicles and for Advanced Driver Assist Systems (ADAS), is pavement markings,” Greg Driskell, ATSSA Board of Directors member and president of Professional Pavement Products, Inc. says. “There’s a significant and almost complete reliance on pavement markings for the automated vehicle technologies of today. A lot of people think AVs mean the car drives down the road and you’re facing the other direction, working on your computer, but we have partial AVs on the road right now.  Honda, Cadillacs, Chevrolets, they all have these ADAS systems and they all depend heavily on being able to see that pavement marking.”

Research suggests that there will not be a significantly new requirements for road marking such as embedded microchips, however, there may be changes such as 6-inch wide edge lines, and possibly adding minimum required pavement marking retroreflectivity levels (which has been a Congressional mandate since 1993 that FHWA is still trying to fully implement).  Changes likes these have been proven in multiple studies to be good for both the human driver and the machine driver.

Roads That Carry More Than Traffic

In the future, roads won’t be only good for transporting goods and services. Our future infrastructure will be able to generate power, collect data and connect our vehicles to each other to communicate vital information. In fact, some roadways are already proving this can be done.

The Ray project in Georgia is deemed as the nation’s first Smart Highway. Tests on this on a 18-mile stretch of a Georgia interstate uses solar energy, recycled tires, vehicle telematics data and roadside right-of-way spaces in an attempt to explore how highways can become more ecologically beneficial, while generating revenue.

The roadway is also gathering data through radios created by Panasonic. According to Allie Kelly, executive director of The Ray project, the radios can hear the data packet being traded between vehicles and this data has the potential to help develop safer highways.

Looking at the data in real time, researchers can see that numerous vehicles activated their wipers at a certain time or that several vehicles report loss of traction. It can also see when vehicles report an air bag deployment, which suggests a collision. This data could help first responders deploy more quickly while also helping DOT officials warn other drivers and reroute them if necessary.

Technologies are also emerging that will allow nanoparticle sensors to be embedded inside asphalt mixtures that can measure compaction and quality control and then relay integrity data to DOTs once the roadway is in place.

“Roadways can’t just be counted on to do one thing anymore,” Nicholas Webb, CEO of LeaderLogic says. “The future success of the asphalt industry will depend on selling a dynamic product with dynamic value that is not mono-functional.”

Webb predicts that by using these nanoparticles, highways in the future will be able to capture billions of data points and provide intervention strategies for the roadway before the cost to repair increases.

With change knocking at the door of the asphalt industry, contractors need to be ready and if we adapt fast enough, we will be positioned well against other road building materials.

“We must be the disruptors for our pavement structures and our work zones to generate data that can be used for project intelligence & predictive maintenance – a service we can help provide to our customers, the road owners, road users and mobility companies – who will demand it,” Audrey Copeland, president and CEO of the National Asphalt Pavement Association (NAPA) says.

Copeland says asphalt contractors should use innovative solutions such as drones, telematics and bots to collect vast amounts of data about our roadways today and use that data to better our industry.

“With software advancement and Artificial Intelligence, this data can be used for insightful and actionable information for stakeholders,” she says. “We can harness data for marketing of the asphalt industry and to show customer preferences. We can turn that data in to project intelligence for the future.”

The transformation of the transportation industry will depend on contractors like you who are willing to move roadway technology forward. Smart cities and highways can’t exist without a workforce willing to build them. Be an early adopter and reap the benefits of your forward thinking.

[VIDEO] Why Autonomous Equipment is Great for the Construction Industry

Scheduled maintenance at the asphalt plant helps to prevent failure while also ensuring the facility is running at peak performance.
Jan 1st, 2021
Latest

The weakness largely reflected job cuts at restaurants but job losses in leisure and hospitality and in private education were partially offset by gains in professional and business services, retail trade and construction
Jessica Lombardo
Jan 8th, 2021

Chao writes that she is ‘deeply troubled’ by the ‘entirely avoidable’ violence on Capitol Hill on Wednesday, as protest resignations from the Trump administration, and calls for Trump's removal, mount
Jan 7th, 2021

Downtime is the last thing you want during the season. That's why Wirtgen offers the Machine Rebuild Program. Get your Wirtgen, Vogele, Hamm & Kleemann machines ready for 2021 now.
Jan 7th, 2021

Division M of the Coronavirus Response and Relief Supplemental Appropriations Act, 2021 provides full funding for highway and airport construction projects in 2021 and $10 billion allocated to the states in support of emergency relief for State DOTs
Jessica Lombardo
Jan 6th, 2021

With 2020 in our rearview, we're hopeful 2021 holds more funding for our roadways and safer working conditions for our crews
Jessica Lombardo
Jan 4th, 2021

State departments of transportation are getting $10 billion in long-awaited emergency aid from a $900 billion COVID-19 relief measure passed by Congress late on December 21 as part of a final year-end legislative package.
Dec 22nd, 2020

The $2.4 trillion COVID relief and annual spending package is expected to pass both chambers of Congress Dec. 21 with overwhelming bipartisan support and be signed into law by President Donald Trump
Dec 21st, 2020

This week Jess & Dormie talk to Edward James, founder of Asphalt Life, about building a community for the asphalt industry through social media and also recap the top 10 road building stories of the year.
Jessica Lombardo
Dec 18th, 2020

Since 2015, there have been over 32,500 crashes in Ohio work zones, with 114 of them killing 126 people. The new dashboard helps users see where the Ohio State Patrol is active and working to keep these construction zones safe for workers and drivers
Dec 16th, 2020
Follow Us