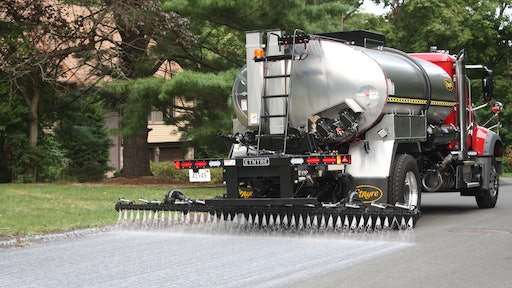 Delta Mist penetrates pavement to soften the asphalt binder and bind it to aggregates.

In Vernon, CT., the department of public works (DPW) enjoys strong community support and relies on its arsenal of pavement preservation techniques to ensure its roads remain in good condition. Twice over the last two decades, the small town has approved bond issues for roads, first in 2005 and then again in 2014. The most recent ballot initiative allowed the DPW to invest $27 million into the community’s 125 miles of roads over a six-year period; a significant investment for this community of about 28,000.

“It was a big chunk of money and a big undertaking,” says Jeff Schambach, lead road foreman. Schambach is a 32-year veteran of the department and also serves on the board of directors of the Connecticut Association of Street and Highway Repair Officials (CASHO). He notes that the multi-year program allowed the community to address much-needed maintenance while spreading out both the cost and the work itself.

From 2014 to 2019, the DPW performed some sort of road maintenance on nearly 280 roads. It employed techniques including full-depth reclamation, mill and pave, and cold-in-place recycling, as well as surface treatments.

“That puts us with around 80 percent of our roads having been touched in the last six years for some sort of road treatment,” Schambach notes.

After completing the overhaul of so many of its roads, the DPW’s focus turned toward protecting that investment. “Now, we need to start looking at some of the roads we did early on to make sure we are maintaining them and prolonging their life,” Schambach says.

While some DPWs entrench themselves with the use of known commodities, the Vernon DPW takes a more forward-looking viewpoint. “I know there’s a lot of the old school mindset out there about new technologies, but you don’t know until you try it. We’re always trying to be innovative and try new products,” he says. “We are always looking for another product that we can use to prolong the life of the roads we’ve just worked so hard on.”

The Vernon DPW uses a variety of surface treatment options including crack sealing, chip seal, NovaChip and Cape sealing. Recently, however, the department put another new technology to the test: the Delta Mist fog seal. Based on the Delta S technology developed by Dr. John Warner and the staff at the Warner Babcock Institute for Green Chemistry, Delta Mist is a plant-based, penetrating asphalt spray rejuvenator. It is sprayed onto road surfaces, entering up to ⅜-in. deep to soften the asphalt binder and renew the bond between the asphalt binder and the aggregate, while also slowing the development of cracks on the pavement’s surface.

The DPW worked with Delta Mist’s manufacturer, Lowell, MA.-based Collaborative Aggregates LLC, to identify an appropriate road for its pilot application. The project size, which covered approximately 5,000 square yards, allowed the DPW to work directly with a contractor knowledgeable with the product —  Riverside Asphalt Services, of Boston, MA.

Schambach says the street selected was one of the first to undergo rehabilitation in 2014, and it adjoins other roads maintained at the same time. “We have two other roads that were completed the same year and in the same condition as this road,” Schambach explains. “It will give us a good side-by-side comparison.”

In preparation for the fog seal application, the street sweeper was sent out the day before to ensure a clean roadway. On the day of application, DPW employees with backpack blowers cleared any remaining debris. One lane was closed to traffic while the other was treated, then the process was reversed. Cars were allowed to exit their driveways throughout the application process. The road and curbs were both treated with an application rate of 0.10 gallons per square yard. Dry time before traffic could resume was approximately 60 minutes.

The organic, plant-based product offered a number of advantages in terms of both the application itself and community feedback, Schambach says. For example, as the curbs were treated, the DPW didn’t have to worry about blocking or covering catch basins. Overspray on grass or plants was also not a concern.

“Afterwards, there was no cleanup; there was no going back and sweeping the road to remove loose chips; there were no people complaining that they’ve got stones in their driveway or on their grass or anything like that,” Schambach says. “With it being a 100-percent green product, it puts people a little bit more at ease. Everybody’s worried now about the use of pesticides, fertilizers and things like that. With this being a green product, it may be something we can utilize in treating our school parking lots as well to prolong their life.”

“We’re probably looking at about a three-year timeframe, and possibly doing another application at year three because the cost is low enough that it would probably bring us to the same cost if we had done a chip seal,” Schambach says.

While it will continue to monitor the fog seal treatment over time, its early reviews are quite positive.

“I think the process is pretty straightforward. There’s not a lot of prep work or cleanup work afterward, and it went off very well with minimal effort,” Schambach concludes. “We’re excited to see what this product does to help us prolong road life for the cost. We’re really hopeful.”