The 25th Annual Highway Report measures the condition and cost-effectiveness of state-controlled highways in 13 categories, including pavement condition, traffic congestion, fatalities and spending per mile. 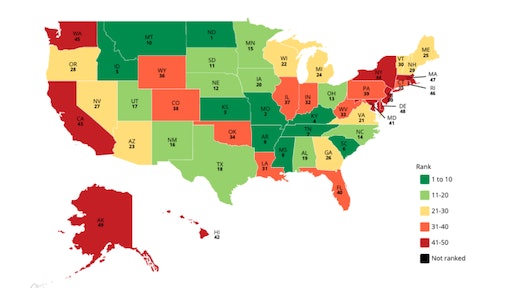 The 25th Annual Highway Report finds the general quality and safety of the nation’s highways has incrementally improved as spending on state-owned roads increased by 9 percent, up to $151.8 billion, since the previous report.  Of the Annual Highway Report’s nine categories focused on performance, including structurally deficient bridges and traffic congestion, the country made incremental progress in seven of them.

However, the pavement condition of the nation’s urban Interstate system worsened slightly. Over a quarter of the urban Interstate mileage in poor condition is in just three states: California, New York, and, perhaps surprisingly, Wyoming.

In the report’s spending categories, Missouri, Mississippi, South Carolina, North Dakota and Tennessee reported the lowest expenditures per mile. New Jersey, Massachusetts, Alaska, Delaware and Maryland had the highest costs most per-mile. In total, the 50 states disbursed $151.8 billion for state-owned roads, a 9.2 percent increase from $139 billion in 2016, the previous data available.

The condition of the nation’s bridges improved slightly in 2019. Of the 613,517 highway bridges reported, 46,771 (7.6 percent) were rated deficient. The best rankings go to three states where less than two percent of their bridges are structurally deficient: Texas, Nevada, and Arizona. Meanwhile, Rhode Island reported a whopping 23 percent of its bridges as structurally deficient.

Five states made double-digit improvements in their overall performance and cost-effectiveness rankings:  Arkansas improved from 32nd to 9th  overall; Mississippi moved from 25th to 8th; Wisconsin went from 38th to 22nd; South Carolina jumped from 20th to 6th; and Iowa improved from 31st to 20th overall.