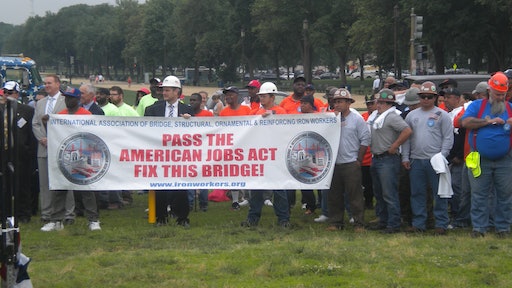 The third "Rally for Roads" was held June 11 at Union Square in front of the U.S. Capitol. The rally is a gathering of labor, road builders, construction unions, industry associations and construction equipment manufacturers pressuring Congress to save the Highway Trust Fund and establish a long-term transportation bill. It's the result of efforts made by members of the transportation construction industry to help move America's infrastructure.

Key members of both the Senate and U.S. House of Representatives appeared before a crowd of several hundred.

Sen. Barbara Boxer (D-Calif.), chair of the Environment and Public Works (EPW) Committee, explained her disappointment with the inaction by Congress to quickly fix the Highway Trust Fund (HTF) problem and said there's no excuse to not have a robust HTF.

The HTF is expected to be insolvent in a few weeks and reimbursements to states on work already under way could come to a grinding halt. In addition, MAP-21, the current two-year transportation spending law, will expire Sept. 30.

"Are we not the greatest nation on Earth?" she asked. "How can we continue in this vein, when 50% of our roads are not where they should be and 70,000 of our bridges are deficient?"

Boxer's committee offered a six-year transportation reauthorization plan in May. “We need a long-term solution,” said Boxer. "I don't want to see gimmicks. I don't want to see patches. We can't build roads or sign up for important projects if we have a three-month patch."

She reiterated her choice to replace per-gallon user fee fuel taxes with a wholesale fuel tax.

Senate Finance Committee Chairman Ron Wyden (D-Ore.) echoed this preference and said about 84% of the nation’s oil consumption is for transportation.

Wyden’s committee is tasked with finding funding for the six-year transportation bill EPW advanced and also with finding a short-term fix for the HTF.

“If you put the brakes on thousands of construction projects, that’s going to be a huge economic multiplier that hurts our country,” said Wyden.

Another speaker, Rep. Peter DeFazio (D-Ore.), has introduced a bill to replace the gasoline tax with a barrel tax on oil, eliminate the sales tax on truck tires, and index the diesel tax to inflation.

One theme echoed throughout the morning was the decaying nature of America's infrastructure.

“You know better than I that America is falling apart and falling behind in the world,” said DeFazio. “Most every other country in the world gets it ... if you build a 21st Century infrastructure, you’re going to be able to compete in a global economy.”

Only one speaker called for an increase in the gas tax. Rep. Earl Blumenauer (D-Ore.), member of the House Ways & Means Committee, has introduced a bill to increase this federal user fee, which hasn't changed since 1993. A day earlier, at the Transportation Construction Coalition's (TCC) legislative briefing, Rep. Blumenauer said the best and quickest fix for the HTF problem was to raise the gas tax. Sen. David Vitter (R-La.), ranking Republican of the Senate Environment & Public Works Committee, had disagreed and said that in a slow economic recovery, you "can't just raise the gas tax."

Terry O'Sullivan, general president of LIUNA, (Laborers' International Union of North America) gave the final speech at the Road Rally and asked members of Congress to replace paralysis with action.

"Many of us in the nation are disappointed and disgusted by some politicians who seem to be politically paralyzed, who seem to be afraid to have a common sense discussion with the American people about the need to fund a long-term highway bill," he said. "Instead, some in Congress propose more short-term, inadequate, half-ass solutions. This should be a no-brainer. Our infrastructure needs fixing. Unemployed construction workers need jobs. And the American people need good roads and a vibrant economy. The question we have to ask ourselves is, 'What the hell are we waiting for?'"