New report identifies urban areas with roughest roads and highest costs to drivers - as much as $1,044 annually 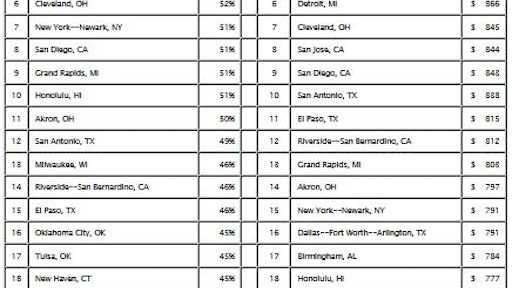 Driving on deteriorated urban roads costs motorists as much as $1,044 annually, according to a new report that evaluates pavement conditions in the nation’s large (500,000+ population) and mid-sized urban areas (250,000-500,000 population) and calculates the additional costs passed on to motorists as a result of driving on rough roads. Driving on roads in disrepair increases consumer costs by accelerating vehicle deterioration and depreciation, and increasing needed maintenance, fuel consumption and tire wear.

These findings were released today by TRIP, a national transportation research group based in Washington, D.C. The report, “Bumpy Roads Ahead: America’s Roughest Rides and Strategies to Make our Roads Smoother,” examines urban pavement conditions, transportation funding, travel trends and economic development. Pavement condition and vehicle operating costs for urban areas with populations of 250,000 or greater can be found in the report and appendices. The charts detail large and mid-sized urban areas with the highest vehicle operating costs (VOC) and highest share of pavements in poor conditions.

In 2013, more than one quarter (28 percent) of the nation's major urban roads – Interstates, freeways and other arterial routes – had pavements that were in substandard condition and provided an unacceptably rough ride to motorists, costing the average urban driver $516 annually. The nationwide annual cost of driving on deteriorated roads totals $109.3 billion.

The federal government is a critical source of funding for road and highway repairs.  But the lack of adequate funding beyond the expiration of the current federal surface transportation program, MAP-21 (Moving Ahead for Progress in the 21st Century Act), which expires on July 31, 2015, threatens the future condition of the nation’s roads and highways.

"The long-term preservation and maintenance of our national transportation system depends on federal investment," said Bud Wright, executive director of the American Association of State Highway and Transportation Officials (AASHTO). "We can do better than the uncertainty of short-term extensions. America needs Congress to fully fund a multi-year surface transportation bill."

With vehicle travel growth rates returning to pre-recession levels and large truck travel anticipated to grow significantly, mounting wear and tear on the nation’s urban roads and highways is expected to increase the cost of needed highway repairs. Vehicle travel, which remained largely unchanged from 2008 to 2013, increased by 1.7 percent from 2013 to 2014 and increased 3.9 percent during the first four months of 2015 compared to the same period in 2014. And, the amount of large commercial truck travel in the U.S. is expected to increase by 72 percent from 2015 to 2030.

“The deteriorating condition of our nation’s urban roads threatens the health of the nation’s economy, reducing the efficiency of a region’s businesses and employers,” said Janet Kavinoky, Executive Director, Transportation and Infrastructure, U.S. Chamber of Commerce and vice president of the Americans for Transportation Mobility (ATM) Coalition. “Attracting jobs and expanding a region’s economy requires a well-maintained, efficient and safe transportation system. Funding needed transportation improvements must be a top priority at the federal, state and local levels and Congress must do its part by authorizing an adequately funded, long-term federal transportation bill."

“With state and local governments struggling to fund needed road repairs and with federal surface transportation funding set to expire this month, road conditions are projected to get even worse,” said Will Wilkins, TRIP’s executive director.  “Congress could reduce the extra costs borne by motorists driving on rough roads by authorizing a long-term, adequately funded federal transportation program that improves road conditions on the nation’s major roads and highways.”

Video: US Construction Industry Speaks - "Quit Kicking the Can Down the Road"