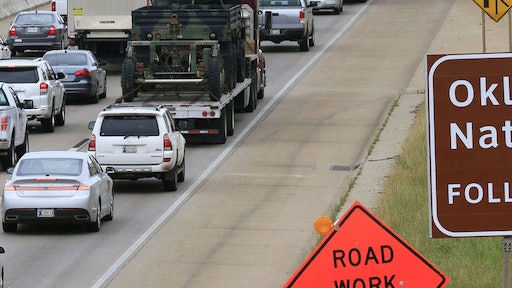 Photo by Paul Hellstern, The Oklahoman

Driving on deteriorated, inadequate and congested roads is costing the average Oklahoma City motorist an extra $2,175 a year, according to a new report issued Wednesday by TRIP, a national transportation research group.

Statewide, it's costing Oklahoma motorists an extra $5 billion a year, said Rocky Moretti, director of policy and research for the nonprofit group based in Washington, D.C.

Moretti, whose group is supported by a variety of transportation organizations, has been hopscotching across the nation releasing state reports that highlight the hidden costs of poor road conditions.

During a news conference, Moretti acknowledged that it is not a coincidence that he was releasing TRIP's Oklahoma report at a time when the Oklahoma Legislature is considering cuts in transportation funding as it seeks to fill an $878 million budget hole.

TRIP tries to put out reports at "times when we think very critical decisions" are being made, he said.

Mike Patterson, executive director of the Oklahoma Department of Transportation, spoke briefly at the news conference and urged the Legislature to pass a motor fuels tax increase.

"We think it's necessary that something be done with a motor fuels tax increase simply because we know the department is going to receive a cut (in appropriations) as we have in six of the last eight years," he said.

Read the full report at NewsOK.com.