Stretch of road outside Stockholm transfers energy from two tracks of rail in the road, recharging the batteries of electric cars and trucks 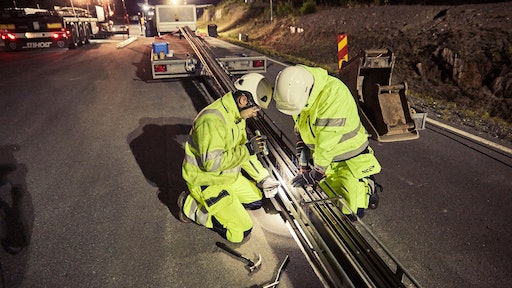 The world’s first electrified road that recharges the batteries of cars and trucks driving on it has been opened in Sweden.

About 1.2 miles of electric rail has been embedded in a public road near Stockholm, but the government’s roads agency has already drafted a national map for future expansion.

Sweden’s target of achieving independence from fossil fuel by 2030 requires a 70% reduction in the transport sector.

The technology behind the electrification of the road linking Stockholm Arlanda airport to a logistics site outside the capital city aims to solve the thorny problems of keeping electric vehicles charged and the manufacture of their batteries affordable.

Energy is transferred from two tracks of rail in the road via a movable arm attached to the bottom of a vehicle. The design is not dissimilar to that of a Scalextric track, although should the vehicle overtake, the arm is automatically disconnected.