Low Energy Asphalt Pavement (or LEAP) is a durable HMA that’s made with 100% recycled materials. 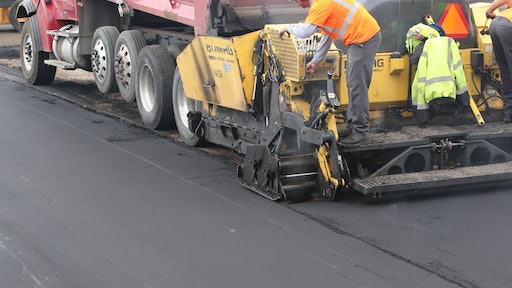 LEAP processes the RAP into injected/stabilized recycled asphalt pavement (I-RAP) which is kept at ambient temperature in storage until heating.

We like our acronyms in this industry; WMA, RAS, RAP, IC, etc. Each stand for innovative advancements in the asphalt paving industry. Well it’s time to add another to your vocabulary: LEAP.

Low Energy Asphalt Pavement or LEAP is just like the hot mix asphalt you know and love, but cleaner, cheaper, greener and strong, all at the same time. Does this sound like what you’re customers are asking for? We thought so.

The LEAP product is a high performance hot mix asphalt (HMA) that’s made from up to 100% recycled asphalt pavement (RAP). As a contractor, you’re probably thinking a mix that contains that much recycled material will never last.

But what if it could? Typically, in most mature markets where mill and overlays are commonplace, for each ton of virgin asphalt produced there is ¾ of a ton of waste RAP placed in a pile for disposal; and these piles are everywhere. Just think about how much money your company would save making a mix with all recycled materials, not to mention how much better it would be for the environment.

“The Superpave specification, and most derivative state specifications, do not permit the use of more than 25 to 50 percent RAP within the HMA mix design,” says Mark Eliot, CEO of LEAP Technologies, Inc.  “This is due to the inability of traditional batch and drum HMA plants to sufficiently heat the aggregate within the RAP to the temperatures necessary to meet baseline performance requirements.”

This is true as high RAP mix designs produced through conventional asphalt plants can cause lower than normal mix performance and often high concentrations of excess smoke, which can violate standard air permit regulations.

“There are other companies around the globe working to produce high RAP mix designs, but it’s not simple or easy,” Eliot says. “The Japanese have developed a plant that produces a 65% RAP HMA mix design with 180 TPH production rate but the plant investment is a staggering $25 million.”

Here’s how they do it:

Step 1: HARVEST; Old or failed pavement is milled off or removed. Material is trucked to the LEAP processing center.

The IMPROVE phase is really all that seems different here, right? So what goes on at the LEAP plant?

Traditional drum asphalt plants heat virgin aggregates to 400 or 550°F using direct or in-direct open flame heat source.  After the aggregate has been heated, PG and RAP are introduced and mixed for a short time before exiting to the silo for storage.

LEAP plants on the other hand, have a smaller footprint than conventional asphalt plants. LEAP processes the RAP into injected/stabilized recycled asphalt pavement (I-RAP) which is kept at ambient temperature in storage until heating. On demand, the I-RAP is loaded into feed hoppers and conveyed through LEAP’s Low Energy Heating System (LEHs) unit. The production room is a clean room with advanced digital control features.

“There were companies in the 80’s and 90’s that experimented using microwave heating with limited success,” Eliot says. “The LEAP discovery isn’t the heating method alone, but a combination of several unique processes that work in concert providing the ability to utilize 100% RAP mix designs to create a high-performance product.”

Eliot says LEAP utilizes an advanced microwave heating system, not the kind you would typically find in your home kitchen, to heat the I-RAP to a pre-specified temperature prior to delivery to the paving contractors. This system, LEHs, uses the microwave energy to selectively heat the aggregate within the I-RAP, enabling LEAP to heat the mixture without degrading the asphalt cement within the emulsion.

The energy wave produced is strong enough to fracture aggregate if desired, but because the product is heated from within, Eliot says there is no pollution created during production.

“After heating, the material is conveyed to a storage silo and ready for contractor pick-up, similar to conventional asphalt plants,” Eliot says. “The simplicity of the plant design and ease of operation allows for 12 month production in any climate.”

Put to the test

Any advancement in HMA technology can always seem too good to be true. No one ever thinks that the product that is being produced is going to be as good as what they’re used to using. That's why they tested it.

LEAP retained American Engineering Testing (AET), out of St Paul, MN as their third party lab and advisor to test the HMA such that it may be compared against Superpave standards developed by the U.S. Department of Transportation, Federal Highway Administration, and used for all paving projects that are funded in a whole or in part by federal funds.

“Dave Rettner, senior engineer at AET, was helpful designing extreme testing protocols for LEAP that revolve around mix performance, he is a fan of the Hamburg Rut Test,” Eliot says. “This test is performed using a wheel which is passed over an HMA sample until the ensuing rut exceeds 12.5 millimeters in depth.  The Hamburg Rut Test is used as a proxy measurement to ensure that the maltene fraction was not damaged during applications in areas where summer paving temperatures can prematurely age the HMA.”

Eliot says this test was an important benchmark for the LEAP HMA (see Table 3) as the asphalt cement within RAP has been aged, and traditional HMA using RAP in excess of 25% has a proclivity to fail early due to the relative lack of maltenes.

“LEAP’s initial mix design (nicknamed “gorilla-mix”) was on pace to fail around 26,000 passes on the Hamburg Rut Machine had the machine not been regulated to stop at 20,000 passes,” Eliot says.

The entire production process of LEAP produces little to no VOC’s or particulate matter, which provides the ability for production to take place indoors unlike conventional HMA plants. This advantage can allow for strategic plant placement in zones where conventional asphalt plants may be prohibited due to air pollution regulations. Optimal plant locations can reduce HMA haul rates potentially lowering the cost for installations.

LEAP is currently building several more plants throughout the US, and in addition to the company-owned plants, LEAP’s licensed plants and plant retrofits will enable this environmentally friendly technology to be incorporated into existing plants around the country.

“LEAP is excited to announce the development of a conventional plant retrofit design,” Eliot says.  “LEAP will be licensing the technology this year to interested parties. The retrofit will allow conventional plants to monetize and dispose of the large piles of RAP while producing high performance, high percentage RAP mix designs, up to 100%. The cost is nominal compared to that of a new plant.”

“The goal is to create a more sustainable and green way to produce asphalt here in the US and beyond. We are interested in looking at supplying this technology to other countries to help them in their efforts of reducing greenhouse gas emissions/ pollution and increasing their overall recycling commitment."

Virgin asphalt cement has two primary chemical components, asphaltenes and maltenes.  Asphaltenes are hard materials that provide the mechanical strength while maltenes are the oily fraction which functions as the sticky component in HMA. Maltenes oxidize with age or excess heat to form asphaltenes which causes the HMA to become hard and brittle. The aged or heat damaged HMA cracks under heavy loads causing failures of the road surface.

“LEAPs handling and treatment of the RAP prior to injection, along with the emulsion formulation used in the injection, defines the final results of performance,” says Eliot. “The microwave heating allows the new emulsion to bond with the old asphalt cement creating what we call a fused surface material. Plant throughput is a function of the number of heating lines, power and desired exit temperature.  LEAP has plant designs for 50-250 TPH for less than half the investment of the Japanese asphalt plant.”

Currently, LEAP’s High Performance HMA is being used by over 26 cities/counties as well as a number of paving contractors with regularity and success, and at any time of year.

What Can LEAP Do For You?:

o   Quicker compaction timeline, reduces the need to wait for the mix to cool.

Ramping Up the RAP