The rehabilitation work must proceed speedily and economically, minimizing the obstruction to traffic. To meet these requirements, the contractor, Fremix Engenharia e Comércio Ltda., elected to use a Wirtgen cold milling machine W 200 with super-fine milling drum. 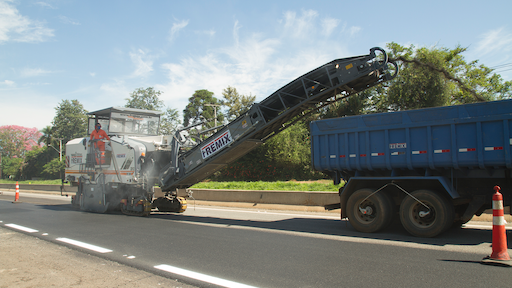 For super-fine milling, the W 200 removes just a few millimetres of the pavement, eliminates any unevenness in the roadway and restores its skid-resistance. Since the reclaimed asphalt pavement is loaded directly onto trucks, the roadway can be reopened to traffic as soon as the milling job is done.

The World Cup finals start in Brazil on June 12th 2014. The first match – between Brazil and Croatia – will take place in the Arena de São Paulo, in the Itaquera district in the eastern part of the city. The stadium's timely completion has been a highly popular subject of speculation.

In contrast, the international fans do not seem to have spared much thought for whether transport conditions and the state of the roads will let them arrive at the stadium in time to see the match. Ensuring that this is indeed the case is a key task at all the Brazilian locations.

São Paulo city and road building contractors have launched a major infrastructure program specifically for this purpose. The Raposo Tavares (SP-270) motorway connecting the federal state of Mato Grosso du Sul with Sao Paulo was one of those in need of repair.

Varying degrees of damage to the surface course at several points between Sorocaba and Araçoiaba da Serra meant that the road surface no longer displayed the required skid resistance. Rehabilitation was necessary, but without removing the complete roadway, as the base course was still undamaged.

The concessionaire, Concessionária de Rodovias CCR via Oeste, enlisted the services of contractor Fremix Engenharia e Comércio Ltda. to rehabilitate a total area of roughly 154,000 m² with a traffic lane width of 3.40 m.

The solution: super-fine milling with a Wirtgen W 200

Which was the best way to adhere to the tight schedule without blocking the congested roads more than was absolutely necessary? For Fremix, the answer was to use a super-fine milling drum. This modified version of the standard cold milling method produces a level skid-resistant surface in just one pass. Further steps, such as paving a new surface course, are normally not necessary. Alternatively, a thin surface course can be paved at a later date.

"With the super-fine milling drum we can groove the pavement at intervals of 6 mm and to a depth of between 2 to 20 mm," explains José Marques Pereira, the man in charge of Fremix's road milling team. This creates a fine surface texture meeting all the requirements of a skid-resistant roadway in just one pass. "And traffic can continue to flow unimpeded on the adjacent lane while the work is in progress. What is more, the rehabilitated lane can be reopened to traffic as soon as the milling work is done."

Greater cost-efficiency with FCS: The "Flexible Cutter System" or FCS for short allows the milling drum to be changed quickly and easily. The milling drums on these cold milling machines can be accessed from the side and are simple to remove. It is lowered onto a drum carriage for easy withdrawal from the housing. The new drum is installed just as easily.

Quick tool changes allow the owner to use the machine for a whole variety of jobs. Several FCS drums with different working widths and tool spacings are available for the W 200. A drum change takes no more than two hours and the cold milling machine is transformed from a standard machine to a super-fine milling machine. The FCS greatly increases flexibility, creating a host of new potential uses and considerably boosting the machine's cost-efficiency.

Easy levellng: LEVEL PRO supplies information on the levelling process and allows the operator to control the milling depth without leaving his platform. Intuitive, ergonomically designed operation with user-friendly graphic displays and function keys are hallmarks of the system. A controller analyses the data from various plug-in sensors, controls the machine's height adjustment and transmits the corresponding data to the control console. Outstanding milled results are constantly assured by the software with optimized control characteristic.

PTS - always parallel to the surface: The proprietary PTS system developed by Wirtgen guarantees precise adherence to the set working depth while relieving the operator to the greatest possible extent. PTS stands for "parallel to surface" and automatically ensures that the machine is dynamically aligned parallel to the road surface.

The front and rear crawler tracks are uniformly lowered in parallel. As part of the PTS system, a 4-fold full-floating axle immediately compensates any unevenness on the right and left, thus ensuring automatic alignment of the machine at right angles to the direction of travel. PTS also includes an automatic backup function for resuming at the required milling depth. In this way, machine operation is greatly simplified while maintaining the high levelling quality.

·     Automatic adjustment of the speed of individual crawler tracks in bends

Traction control by the ISC minimizes the extent to which individual crawler tracks slip in tough conditions and guarantees optimum traction. What's more, ISC electronically adjusts the speed of the inner and outer crawler tracks in bends, thus reducing wear on the crawler shoes. ISC also adjusts the machine's advance rate to optimize utilization of the engine power.

Quick completion of the project

Valmir Bonfim, Site Manager for Fremix, is more than happy with his cold milling machine's performance: "The W 200 from Wirtgen delivered a performance that surpassed our expectations. We were able to complete the project well before the contractual deadline and release the job site for other work.

Due to its compact size and low weight, the W 200 can easily be transported directly to the next job site." Once there, it is swiftly fitted with a standard milling drum thanks to FCS, enabling it to remove the asphalt pavement to a depth of 5 cm over an area of 21,320 m². Finishing the roadway is the job of Willian Souza Azevedo and his asphalt paving team.

The concessionaire is also overjoyed: awarding the contract to Fremix ensured rapid completion of the construction work. Fans from the western fringes and neighboring countries – Paraguay, Bolivia, Chile – can now reach the stadiums in São Paulo in good time to cheer on their respective teams.