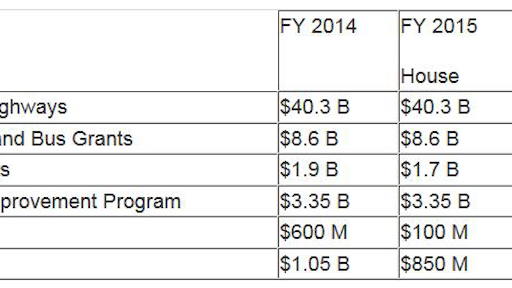 This table shows specific funding levels for transportation construction accounts in FY 2015 as compared to FY 2014.

By a vote of 29-1, the Senate Appropriations Committee approved a fiscal year 2015 appropriations bill for the Departments of Transportation (DOT) and Housing and Urban Development. Sen. Mike Johanns (R-NE) was the only dissenting vote. The bill funds most DOT programs at FY 2014 levels just as the House had done two weeks previously. The Senate Committee made some changes in the House approved levels by adding $472 million to the Federal Transit Administration’s new starts capital grants program. The additional new starts money allows FTA to fund new rail and Bus Rapid Transit (BRT) projects in California, Maryland, North Carolina, Florida, Texas and other states, in addition to fulfilling funding obligations for on-going work. The Senate also provided $450 million more than the House’s $100 million for TIGER discretionary surface transportation grants and freezes Amtrak grants at the FY 2014 level of $1.390 billion, whereas the House bill cut $200 million from Amtrak capital grants. Both the House and Senate pointed out that this funding is contingent on the reauthorization of MAP-21, as well as providing additional revenue for the Highway Trust Fund prior to Oct. 1, 2014.