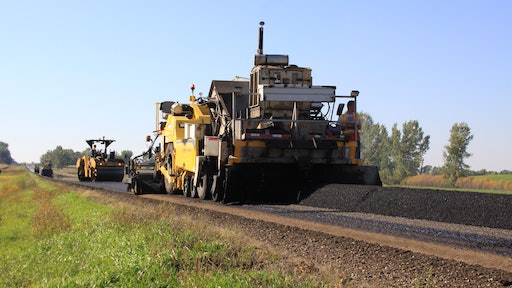 The American Road & Transportation Builders Association (ARTBA) outlined a detailed proposal it believes could end the political impasse over how to fund future federal investments in state highway, bridge and transit capital projects. The “Getting Beyond Gridlock” plan would marry a 15 cents per gallon increase in the federal gas and diesel motor fuels tax with a 100% offsetting federal tax rebate for middle and lower income Americans for six years. The plan, ARTBA says, would fund a $401 billion, six-year highway and mass transit capital investment program and provide sustainable, user-based funds to support it for at least the next 10 years.

While announcing the plan, ARTBA President & CEO Pete Ruane pointed out that it's been seven months since the last short-term extension. "There are some on Capitol Hill that are working very diligently to pass a multi-year, adequately funded bill," he says. "There are others that want another short-term extension when the next highway bill expires on May 31. In the mean time, several states will have to delay or even stop projects because of funding uncertainty.

“If our national leaders think they need to use budget gimmicks or ‘one-offs’ again to pass the surface transportation investment program the states need and the business community has been pleading for, then use those devices to provide a $90 tax rebate to middle and lower income tax filers to offset the cost to them of a 15 cent per gallon increase in the federal gas tax,” he says. “Don’t use them to just prop up the program for a few years. That won’t resolve the structural damage that’s been done to the Highway Trust Fund, nor will it allow states to do the long-range capital planning that the nation needs.”

“Getting Beyond Gridlock” plan

ARTBA has long maintained that an increase in user fees, specifically the federal motor fuels excise rate, is the most efficient way to resolve the Highway Trust Fund (HTF) cash flow problem — now about $15 billion per year— and raise revenue needed to fund expanded capital investments in freight mobility and traffic congestion relief over the next decade. That has also been the recommendation of two blue ribbon commissions mandated by the Congress and the National Commission on Fiscal Responsibility and Reform (Simpson-Bowles) appointed by President Obama.

"The gas tax works," says Ruane. "It's a proven funding mechanism, but it hasn't been adjusted for the last 22 years."

So far, the politics of a user fee increase has been a stumbling block. The proposed “Getting Beyond Gridlock” plan addresses that. ARTBA proposes marrying the first increase in the federal gas and diesel motor fuels tax rate in 22 years with, if necessary, an offsetting annual gas tax rebate for middle and lower income tax for the length of the next surface transportation program reauthorization bill, which is due May 31.

ARTBA points out that during the Bush Administration, Congress provided tax rebate checks of up to $600 for individual filers and $1,200 for joint filers in 2008. A similar tax rebate plan was enacted in
2001.

Ruane says ARTBA has talked to several key construction groups and members of Congress, including committee members, regarding the "Getting Beyond Gridlock" plan. "We've had numerous discussions with pivotal members of various committees and associations," he says. "They're all open minded to this proposal.

"We want to show Congress that there's a solution to the problem of funding gridlock that allows them to move forward with a very robust highway bill and not just short-term extensions."

Ruane says it’s up to the Senate Finance and House Ways & Means committees to figure out how to pay for the tax rebate. But the association offered one possible mechanism that has been elevated over the
past year in the political discussion on highway and transit funding — a one-time federal repatriation transition tax.

The Obama Administration has proposed using a 14% transition tax on, what it says, is the up to $2 trillion of untaxed foreign earnings that U.S. companies have accumulated overseas to augment the
existing HTF revenue stream and fund its $478 billion six-year transportation proposal.

This year, Rep. John Delaney (D-Md.) has introduced legislation to use deemed repatriation at an 8.75% tax rate to generate an additional $120 billion to the HTF for six years. The ARTBA tax rebate proposal would require $103.3 billion over six years.

After the repatriation “fix” period is over, the trust fund’s cash flow problem not only returns, but will be worse than it is now, threatening another crash in the highway and transit investment program, he says.

“Our proposal provides an answer for those who believe Americans are not willing or able to invest another $90 a year to improve their mobility and help keep the cost of just about everything they buy
down,” Ruane continues, noting traffic congestion increases the cost of transportation for businesses because time is money. “Those costs are being passed on to consumers.”

Ruane feels the acceptance amongst consumers will be "dramatically positive" when they see how little their investment is compared to what they get in return. He noted the proposed additional gas tax cost over a year “is less than we all pay each month for cell phone service.”

"I submit the mobility we get from our modest, individual contributions to transportation infrastructure improvements is an outstanding return on investment," he adds.

Where the numbers come from

ARTBA says a 15 cent motor fuels increase would generate an additional $27 billion per year for HTF investments. The association’s model shows that would end the eight-year HTF revenue crises cycle.

With the additional revenue, ARTBA says, the existing core highway and transit programs would keep pace with forecasted inflation. Given that the FHWA forecasts truck traffic will increase 56% between now and 2040, ARTBA recommends using a significant portion of the remaining newly generated user revenue — about $12 billion per year — to fund federal investments in multi-modal capital projects that upgrade the U.S. freight network and help reduce traffic congestion bottlenecks on it.

“Two years ago with MAP-21, Congress did its job and enacted significant highway and transit program reforms that help ensure, going forward, federal investments are strategic, data and performance driven, transparent and utilized with accountability,” Ruane says. “MAP-21 also set the stage for a new strategic initiative to upgrade the U.S. Freight Network with capital projects that have national and regional significance. The only thing lacking was the funding to move forward. This plan provides it.”

The ARTBA executive also pointed out the proposal “gives the Congress additional time to fully explore, and if deemed appropriate and workable, transition to other user-related mechanisms that have been discussed for funding future transportation infrastructure investments—like dedicated energy development fees, per barrel or refinery fees, VMT fees or Interstate tolling.

"Meanwhile, state programs and the mobility of U.S. businesses and all Americans won’t be held hostage to indecision in Washington,” he adds.

The goal, Ruane says is to develop a long-term solution to the funding issue. "Don't just dig us out of the highway trust fund pothole for a couple of months or years," he says. "The situation we're in is strangling our national economy and our global competitiveness.

“We hope this is helpful to Congress and the Administration as they get serious about a real solution that doesn’t just dig out of the huge hole that has been created, but also starts making the bold capital investments necessary to help U.S. businesses and show Americans real results. If there is a better plan out there that puts the surface transportation program back on solid ground over the next 10 years with a sustainable growth trajectory, then let’s move on it now," he says. "The time for cogitating and fretting is over. The clock is ticking.”