Americans Have Driven Over 3 Trillion Miles in Last 12 Months

Vehicle miles traveled has increased 36% since 1993, when the federal motor fuels excise rate was last adjusted. 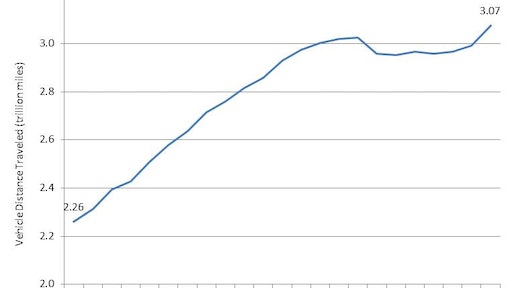 The Federal Highway Administration’s monthly “Traffic Volume Trends” report says that over the past 12 months Americans have driven a record 3.07 trillion miles. VMT was up 3.9% in April, compared to April 2014. VMT has increased 36% since 1993, when the federal motor fuels excise rate was last adjusted.

The American Road & Transportation Builders Association (ARTBA) says that if Congress needs another reason for enacting a robust, multi-year highway and public transit investment bill, a new report from the Federal Highway Administration (FHWA) provides one — vehicle miles traveled (VMT) in the U.S. continue to climb and are on pace for a record-setting year.

FHWA’s monthly “Traffic Volume Trends” report, released June 24, says that over the past 12 months Americans have driven a record 3.07 trillion miles. VMT was up 3.9% in April, compared to April 2014, according to FHWA.

The report shows VMT has increased 36% since 1993, when the federal motor fuels excise rate was last adjusted.

Fixing the ailing federal Highway Trust Fund (HTF) — the source, on average, of nearly 52% of annual highway and bridge capital investments made by state governments — is the first thing Congress should address, followed by passage of a long-term transportation bill that meets the increased mobility needs of the American people, according to ARTBA.

The association’s “Getting Beyond Gridlock” (GBG) proposal would put the HTF back on sound financial footing with a 15 cents-per-gallon increase in the federal motor fuels tax that would be coupled with a 100 percent offsetting federal tax rebate for middle and lower income Americans.

GBG would fund a six-year, $401 billion highway and public transit investment authorization and permanently eliminate the program’s $16 billion per year “funding gap.”  It would allow for new investments in the National Freight Network that would be aimed at improving the movement of goods.