The worst bottleneck, as measured by hours of delay, is in Chicago, IL. Los Angeles, CA owns the next six of the top 10. 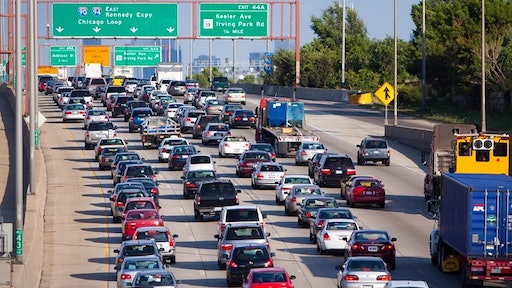 A new study released by the American Highway Users Alliance identifies America’s 50 worst bottlenecks and finds that the very worst bottleneck, as measured by hours of delay, is in Chicago, IL. Los Angeles, CA owns the next six of the top 10.

Speaking at the American Highway Users Alliance press conference, U.S. Transportation Secretary Anthony Foxx said, “This report furthers the unassailable truth that America is stuck in traffic. The good news is that this problem is solvable, and Congress can be part of the solution. As a long-term surface transportation bill moves through conference, I urge our elected leaders to provide the funding growth and policies that are necessary to improve commutes, to raise the bar for safety, and to keep the country moving in the 21st century.”

In the top-ranked Chicago chokepoint, on the Kennedy Expressway (I-90) between the Circle Interchange (I-290) and Edens junction (I-94), the bottleneck was found to extend 12 miles, costing motorists 16.9 million hours’ worth of time, equivalent to $418 million in 2014. More than 6.3 million gallons of fuel is wasted on I-90 while cars idle or crawl in traffic. By just fixing America’s worst bottleneck, an annual reduction of 133 million pounds of carbon dioxide emissions would also be likely, the study found.

Besides identifying and ranking the nation’s 50 worst traffic bottlenecks, the study, Unclogging America’s Arteries 2015, examines the top 30 chokepoints closely and details many of the major benefits that will accrue to society by fixing them. In addition to improving mobility and quality of life for motorists, fixing the top 30 bottlenecks alone would, over 20 years:

“These findings are critically important and mean that our nation will derive huge benefits from fixing the worst gridlock in our nation’s highway system: benefits that go way beyond improving mobility for highway users,” states Greg Cohen, President and CEO of the American Highway Users Alliance.

Former Kansas Governor Bill Graves, who is the Chairman of the Highway Users and the President and CEO of the American Trucking Associations, called the study “a huge reminder of the very high costs of neglecting our nation’s transportation infrastructure. We hope this report will be one more huge wake-up call to our nation’s leaders about the importance of addressing our critical highway needs.”

“These bottlenecks cost our economy billions with the delays they cause moving our nation’s freight. They are truckers’ worst nightmares come true, but one that tens of thousands of our nation’s freight haulers have to deal with daily,” Graves said.

“The results are a sad reminder that bottlenecks harm the quality of life of motorists nationwide,” said Kathleen Bower, AAA Vice President, Public Affairs & International Relations.  “Our states desperately need stable and predictable funding to fix these problems so that highway bottlenecks no longer rob people of time, endanger driver safety or cause costly wear and tear on vehicles.”

Also commenting on the study, Ed Rendell, Co-Chair of Building America’s Future and former Pennsylvania Governor, said “As millions of Americans get ready to make their way home for Thanksgiving they need to pack their patience along with their bags.  As this study ably demonstrates, gridlock and bottlenecks have significant impact on our economic competitiveness and quality of life.

“There is no one magic solution,” he continued. “It’s going to take a combination of intelligent technologies and investments in infrastructure to get traffic moving more efficiently.  I know that travelers are frustrated with these bottlenecks and traffic delays, and one of the best ways for Americans to ensure they are heard is by communicating this frustration directly to their Member of Congress.  That’s why Building America’s Future created a free mobile app, I’m Stuck, for citizens to directly ask their Member of Congress to address this gridlock.  We know what the problem is and what’s causing it – now, we need a Congress who is willing to take long-term action to fix it.”

“With the major environmental and safety benefits factored in on top of the economic and mobility benefits, the real question is, can we afford not to fix them?” Cohen asked. “We’re not just saving motorists’ time by fixing them. We’re saving their lives and improving our air.”

As for the bottlenecks themselves, the study’s top 50 list includes trouble spots in the following Metropolitan Areas: 12 in Los Angeles, 9 in and around New York City, 3 in Chicago, 3 near Washington D.C., 3 in Houston, 3 in Boston, 3 in Dallas, 3 in Miami, 2 in Atlanta, 2 in Philadelphia, and 2 in San Francisco/Oakland.

Surprises included Austin breaking into the top 30 list at number 10, and Norfolk, VA and Tampa, FL — places that one might not expect to compete in the big leagues of bottlenecks – coming in at 38th and 45th, respectively.

The study relies on the same data utilized by the Federal Highway Administration to pinpoint the major chokepoints where motorists and freight operators desperately need relief, and is a follow-up to a report the Highway Users issued over 10 years ago. Bottlenecks were ranked based on backups in both directions over the entire day, not just one direction during rush hours.

The Los Angeles region had far more top bottlenecks than any other metropolitan area, claiming the 2nd through 7th worst spots, as well as the 11th, 13th, 14th, 29th, 30th and 40th. LA’s worst was the 405 between SR22 and the 605 where the annual cost of delay exceeded $190 million, wasting 1.8 million gallons and 36.7 million pounds of CO2, with daily backups over 4 miles long.

Also breaking into the top 10 was New York City with the 8th and 9th worst bottleneck at the notorious Lincoln Tunnel and on I-95 from Manhattan across the Bronx. Metropolitan New York also had the 18th, 19th, 21st, 31st, 33rd, 37th, and 42nd – ranked chokepoints.

“While the rankings and specific bottleneck locations are important, this study has another important mission,” Cohen said. “We want to give a voice to drivers that are desperate for relief. Our report includes some great success stories that show traffic congestion can—and must be—addressed. We offer examples of some of the severe bottlenecks that were identified a decade ago but no longer make our list because they were fixed.”

“At this very moment, Congress is finalizing the first new major long-term highway bill in more than 10 years. We will have a tremendous opportunity to fix the trouble spots that cause motorists and truckers daily frustration, idling engines that waste fuel and emit greenhouse gases,” Cohen continued.

“Our study estimates the annual societal costs caused by these bottlenecks,” the Highway Users President continued, “and in doing so it becomes clear that it costs us as a nation far less to fix these chokepoints than to keep paying the safety, environmental, and time costs that accrue day in and day out, year in and year out. Cumulatively, the costs are staggering and restrain our economy.”

The report notes that bottlenecks can be fixed and points to specific chokepoints that have been addressed and, as a result, were not included in the rankings. Projects cited include the Woodrow Wilson Bridge replacement on I-495 in the Washington, DC area, the Marquette Interchange in Milwaukee, and the Katy Freeway reconstruction in Houston.

“Our study clearly makes the case that fixing these chokepoints is very important to our society on many fronts besides the saving of time and money for road users,” Cohen continued. “When we are moving at reasonable speeds on our highways, we also save fuel and therefore also sharply curb damaging emissions yielding major health and environmental benefits.

“And we must not forget that nationwide we still lose over 30,000 lives in vehicle crashes annually on our nation’s roads, and suffer nearly 2.5 million injuries. This report quantifies crash reduction benefits at our worst bottlenecks—one more major reason we must address and fix these bottlenecks,” Cohen urged.

“Congestion relief projects that utilize advanced technology provide an option for policymakers who want to find ways to reduce greenhouse gas emissions and save fuel. Bottleneck removal is a consumer-friendly approach to get there, without the federal regulations that have proven to be so politically controversial,” Cohen concluded.

Further information about this study is available on the Highway Users website at highways.org.