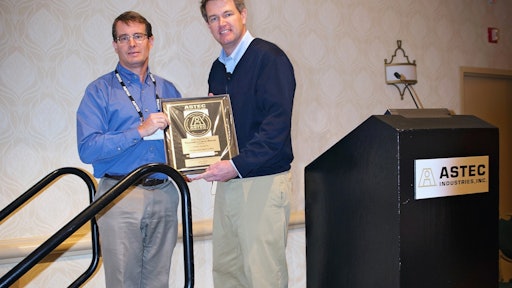 The Astec Industries Founder’s Award was established in 2014 to annually recognize the top-performing individual subsidiary of Astec Industries. Kolberg-Pioneer, Inc. is one of three Astec Industries companies that make up KPI-JCI and Astec Mobile Screens, a worldwide leader in manufacturing equipment for the aggregate, construction and recycling industries.

“Kolberg-Pioneer, Inc. is very pleased to receive the Astec Industries Founder’s Award this year,” said President Jeff May. “The company had another excellent year in 2015, and we are proud to be recognized for this honor, especially considering all of the other Astec Industries companies who could have received this award. As usual, the dedication and hard work displayed by our associates was exemplary and showed their commitment to providing the best equipment value and service in the industry.”

“We’d especially like to thank our many dealers and customers for their continued support and trust in us,” he added. “Without them, we know none of this would have been possible.”

Kolberg-Pioneer, Inc. is the second Astec Industries company to be honored with the award. Last year, Johnson Crushers International – which is part of KPI-JCI and Astec Mobile Screens – was named recipient of the award.