ARTBA and ATA are joining forces to host a lunch and policy discussion to mark the law signed by President Eisenhower that kicked-off the funding and construction of the nation’s 47,000-mile Interstate Highway System 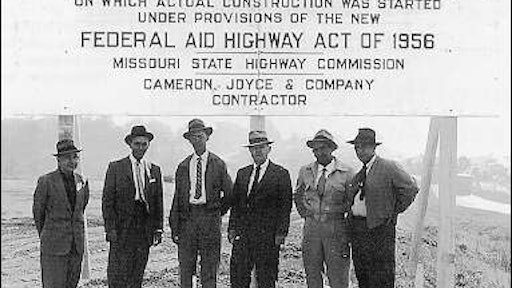 The American Road & Transportation Builders Association (ARTBA) and American Trucking Associations (ATA) are joining forces to host a lunch and policy discussion to mark the 60th anniversary of the law signed by President Eisenhower that kicked-off the funding and construction of the nation’s 47,000-mile Interstate Highway System. It takes place June 29 from 12-3:00 p.m., at the National Press Club in Washington, D.C.

The event will explore what the Interstates of the future should look like to keep America moving and the U.S. economy growing. Senate Environment & Public Works Committee Chairman Jim Inhofe (R-Okla.) will deliver the keynote address.

Confirmed speakers participating in the panel discussion include:

Others participants will be announced shortly. The event will be moderated by Jim Pinkerton, a Fox News contributor and former senior official in the Reagan and George H.W. Bush Administrations.

There is no charge to attend the lunch, but registration is required via ARTBA’s website atwww.artba.org.

ARTBA was founded in 1902 to advocate a federal-state partnership to build a defined national network of modern, lane-divided roads that would connect all state capitals with each other and with Washington, D.C. That vision became a reality on June 29, 1956, when President Eisenhower signed the law creating the Interstate program and Highway Trust Fund to finance its construction.

American Trucking Associations is the largest national trade association for the trucking industry. Through a federation of 50 affiliated state trucking associations and industry-related conferences and councils, ATA is the voice of the industry America depends on most to move our nation’s freight. Follow ATA on Twitter or on Facebook. Trucking Moves America Forward.