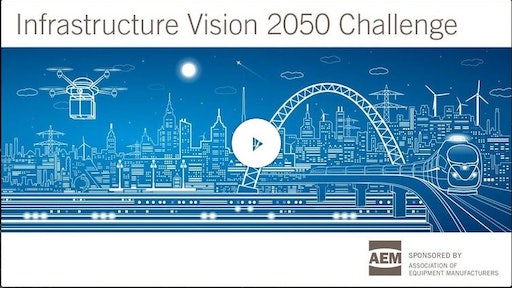 The Association of Equipment Manufacturers (AEM) has named five winners in the “Dream” phase of the Infrastructure Vision 2050 Challenge, an incentivized competition launched by the trade association to solicit groundbreaking ideas and solutions that address some of the biggest challenges facing United States infrastructure.

Launched in January, the three-phased incentivized competition challenges a community of innovators to think in aspirational and disruptive ways and to reimagine personal mobility, freight movement, and utility infrastructure components and systems in the United States.

The “Dream” phase of the Infrastructure Vision 2050 Challenge generated 30 submissions from competitors based in the United States, Canada, Indonesia, the Philippines, Romania, the United Kingdom, and Ukraine. Submissions were judged based on the degree to which the proposed solution improved infrastructure capacity, safety, and connectivity, as well as on innovativeness and viability of the solution’s implementation. A five-person panel of expert judges evaluated the submissions. Several winners consist of teams from the University of Alabama at Huntsville, the University of Alabama at Birmingham, Auburn University, the University of California at Berkeley, and the George Washington University. All five submissions are available here.

“We are excited about the level of interest and diversity in submissions in the second phase of AEM’s Infrastructure Vision 2050 Challenge,” said AEM President Dennis Slater. “So far, in just six months alone, we have explored a number of ways to reinvent and prepare for the next generation of U.S. infrastructure. The winning innovators were those who dared to think big and generate ideas that move us away from the pothole discussion and towards bold and innovative solutions.”

The Infrastructure Vision 2050 Challenge is part of a larger thought-leadership initiative launched by AEM last year that will develop a long-term, national vision for United States infrastructure. To continue to follow the third and final phase of the competition, click here. Winners of the incentivized competition will be featured at the CONEXPO-CON/AGG 2017 trade show’s Tech Experience, in March 2017 in Las Vegas.