The airless radial tire outperforms everything round, is flatproof, maintenance-free and offers one of the most fundamental paradigm shifts in vehicles 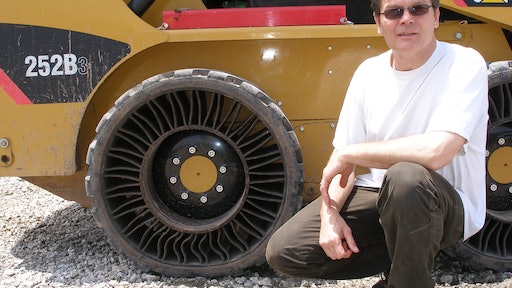 I’ve never made a point of getting a photo of myself with a piece of equipment like some autograph hound after a celebrity, but I found myself doing just that with Michelin’s X-Tweel for skid steers.

In 25 years of covering construction equipment, nothing this simple has ever impressed me with such a profound sense of impending paradigm shift.

The cylindrical structure to which the tread is attached – Michelin calls it a shear beam – is made similarly to a radial tire with multiple steel belts sandwiched with rubber. The semi-rigid band supports the load much like the arch of a suspension bridge. The load hangs from the polyurethane spokes.

Lots of skid steer users should look closely at the X-Tweel SSL. Price will be discouraging. Michelin says the X-Tweel SSL costs double to triple the cost of a comparable pneumatic radial. But relative to the cost of replacing frequently punctured pneumatic tires, they should save money.

Risk of flats and need for inflation-pressure maintenance is gone. With no air pressure to leak, the tire’s footprint never changes and the promise of much longer tread life seems secure.

Tweel performs better than a pneumatic tire – its pitch rate is about one-third that of pneumatics – and it doesn’t have the rigidity and damaging drive-train loads that solid and semi-solid tires pose.

A rigid wheel loses kinetic energy when it strikes an obstacle, whereas tires and Tweels tend to deflect over the obstruction. With its lower pitch rate, Tweel doesn’t bounce as high as an air-filled tire, and quickly settles down with little follow-on bouncing.

Michelin claims Tweel will last three times longer than conventional bias-ply tires, and twice as long as foam-filled tires. Video showed Tweel working after having been blown up with explosives and with many of its rubber spokes intentionally cut; in limp-home mode to be sure, but working.

In the dawn of hybrid dozers and excavators, the combination of tire and wheel (ie: “tweel”) seems simple almost to the point of trivial.

But consider all of the vehicles that ride on tires. Tweel should be applicable to most of them.

It performs better than pneumatics, is flatproof, and requires no maintenance. Eliminating the variable of inflation pressure, Tweel's rubber compounds, spoke thickness and shear-beam construction can be tuned with minute control to perform perfectly in each application.

As production grows, applications spread and prices come down, Tweel’s value proposition will continue to improve.

“This changes everything” doesn’t seem so much like hyperbole.

Your Vote Counts for the ForConstructionPros Blog!