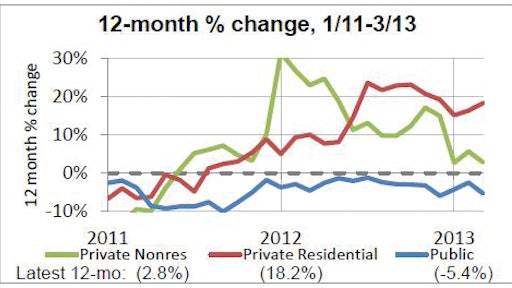 Simonson expects 10% growth by year’s end for both private nonresidential and residential spending (red and green lines). But public construction spending (blue), should continue to decline at -2% to -5%.

Construction-industry economists brought together for a Reed Construction Data webcast in May revisited 2013 forecasts through the lens of first-quarter results.

It’s agonizingly slow but consistent with earlier forecasts, and far better than the slide the industry experienced from 2008 to 2011. A little attention to the various sectors quickly identifies the best business opportunities.

Flip through the graphs in this article's image carousel for the 2013 construction forecast details.