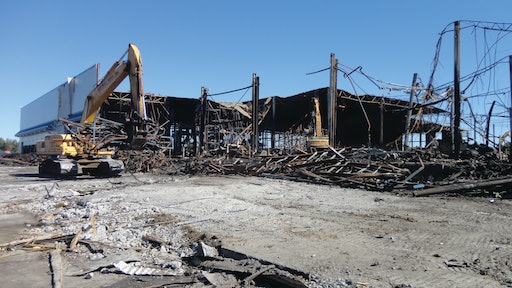 Geppert Bros. assisted firefighters over Labor Day weekend 2013 when a blaze destroyed a 300,000-sq.-ft. food-distribution warehouse outside Philadelphia. The demolition contractor hauled away 300 truckloads of spoiled food and debris in the weeks that followed.

The fire caused the roof, which was lined with hundreds of solar panels, to collapse. Thick black smoke could be seen bellowing from the facility for miles. More than 200 firefighters from the surrounding counties responded to quench the blaze that consumed the 300,000-sq.-ft. warehouse distribution center, a complex about the size of five football fields.

Thirty-five million pounds of charred, rotten meat had to hauled offsite quickly as neighbors complained of a putrid stench.

Geppert Bros. was on site on Labor Day, assisting the various fire departments in the removal of the metal panel exterior walls so fire fighters could bring water to numerous hot spots still burning in the warehouse complex. The company could not open up the roof of the structure, as thousands of solar panels remained energized, potentially endangering First Responders and Geppert Bros.’ workforce.

Geppert Bros. arrived on the scene with a fleet of excavators, loaders and trucks to assist the firefighters in getting the fire under control, to remove the rotting meat, and begin dismantling the warehouse complex. At the height of clean-up, Geppert Bros. has nine machines working on the site.

Dietz & Watson hired BioTriad Environmental Inc. of Stroudsburg, Penn., to deal with the smell that was left over from the massive Labor Day weekend barbeque. More than 300 truckloads of debris, each weighing up to 20 tons, were hauled offsite to help dissipate the odor from the fire. The charred meat products were disposed of at the nearby Burlington County (N.J.) landfill and the Waste Management facility across the Delaware River in Tullytown, Penn., north of Philadelphia in Bucks County.

Odor from the burned meat products was appalling. Everyone on site wore respirators and even then the smell was difficult to deal with. It was one of the biggest challenges faced by the first responders, the demolition workers and the general public. Many Geppert Bros.’ long-time employees who have worked a variety of unique work environments over the years were hard-pressed to remember a project that presented such horrific working conditions.

Almost the entire warehouse section of the Dietz & Watson complex was destroyed in the fire. Geppert Bros. demolished this warehouse section down to the slab, leaving the office section of the structure in place. Geppert Bros. was on-site in Delanco for many months to come. Dietz & Watson has not yet determined what to do with the office section, slab, footings and foundation.

Geppert Bros. worked closely with fire inspectors on-site to assist in the forensic evaluation of the cause of the blaze, helping the investigative team sift through the debris. The demolition contractor’s response to this major conflagration over a holiday weekend is an example of the type of disaster response services NDA members provide every day in the U.S., Canada and beyond.