Site development contractor EHC Inc. found a way to reuse excess material it was excavating from a road widening project and turn it into a second job 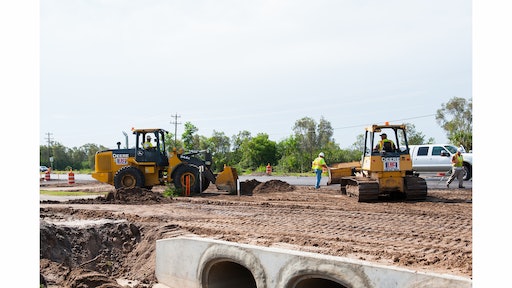 State Road 78 in Florida is being widened from two to four lanes, and the last two miles is currently under construction. Known as the Pine Island Road Widening Project, EHC, Inc. is doing the site development work on the two-mile project including shoulder work, drainage improvements and excavation for two water retention ponds. EHC’s services include 170,000 cubic yards of lake and road excavation, stabilized subgrade and finish grading.

EHC started work in late 2012 and is on schedule to finish in the fourth quarter of 2014. EHC started its part of the project with excavation of the first pond. Part of the excavated material was then used for embankment material to build up the road. The work started on the south end with the eastbound lanes and then EHC switched the traffic pattern to work on the westbound lanes. Once that was complete the contractor excavated the other pond.

In order to meet the FDOT’s structural requirements for the subgrade under the roadway, EHC crushed and mixed in shell material excavated from one of the ponds, said EHC President Jeff Hunt.

Since EHC had a large volume of dirt that needed to be moved from the site quickly, the contractor used Hitachi 450 and 800 excavators on the Pine Island road project. The larger excavators were beneficial in removing the large amount of dirt in a timely manner, said EHC Vice President Tony Hamilton.

In addition to using the excavated material to help build up the road, EHC was also able to find a use for the over 100,000 cubic yards of excess dirt from the project. Just down the road construction was starting on a new Sam’s Club, and the project needed the exact amount of dirt EHC had left over from its Pine Island Road project. Because the area has limited fill and it can be very expensive to transport dirt, EHC had the perfect solution.

Working on two projects and transferring the excess dirt between the jobs was no simple task. EHC estimated it transferred 140,000 cubic yards of dirt in 7,500 truck loads over the course of less than two months, according to Hamilton. The larger Hitachi excavators and a well thought out excavation schedule allowed EHC to load the dirt as it was being excavated right into the dump trucks which then took it over to the Sam’s Club jobsite.

Coordination between the two projects was a daily task. EHC had a foreman on each project and a superintendent who was communicating with both foremen and the onsite management on both projects each day. Coordination plans included schedules, traffic shifts and working with the various other trades on each jobsite.