Sixty-six different types and sizes of precast concrete channels weighing between 225 to 500 lb.s were hoisted up by a specially modified crane during reroofing of Chicago's James W. Jardine Water Filtration Plant 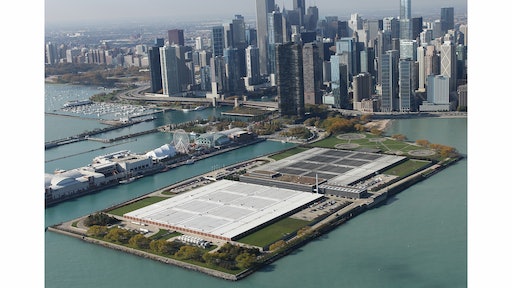 The largest, most complex reroofing project in Chicago during the past 10 years capped off in September 2014 with installation of 10.3 acres of Flex Elvaloy KEE thermoplastic membrane atop the city’s Jardine Water Filtration Plant on Lake Michigan.

The last of 1,086 rolls of the Flex fleece-backed membrane was installed in late September 2014, bringing to fruition the largest, most complex reroofing project in Chicago during the past decade and the biggest ever for Flex Membrane International Corp. during its 25 years in business.

“The Jardine plant is an engineering marvel, but a half-century of constant 80-degree relative humidity and chlorine processing inside the facility corroded roof channels,” said John Cronin, president of Trinity Roofing Service,

The project began with erection of a 112,000-square-foot plywood scaffolding platform blanketed by a 60 mil membrane that established a leak-free zone over concrete filter beds below and allowed the plant to operate without interruptions.

Next came removal of the coal tar roof and cellular glass insulation. Weight restrictions stipulated that dumping take place in a single staging area, requiring crew members to travel up to 10 miles per day back and forth over the roof to discharge loads during latter stages of the project.

Sixty-six different types and sizes of precast concrete channels weighing between 225 to 500 pounds were hoisted up by a specially modified crane, and all 30,000 had to be individually inspected and approved before installation. Seven miles of backer rod filled in seams between these slabs.

The Flex FB Elvaloy KEE 90 mil membrane was installed in hot asphalt onto a built-up roofing assembly, topping off a total roofing system backed by a 30-year warranty. Dupont Elvaloy KEE is a high molecular weight solid plasticizer that does not migrate out of the membrane while maintaining flexibility and toughness throughout its service life.

Built on rubble from the Great Chicago Fire of 1871, the mammoth concrete vaulted edifice went online in 1964 on a 60-acre peninsula off the banks of Lake Michigan next to the Navy Pier. Almost one billion gallons of water funnel into the plant each day - more than any other purification system in the world - where it is processed and dispensed to five million consumers throughout Chicago and surrounding communities.