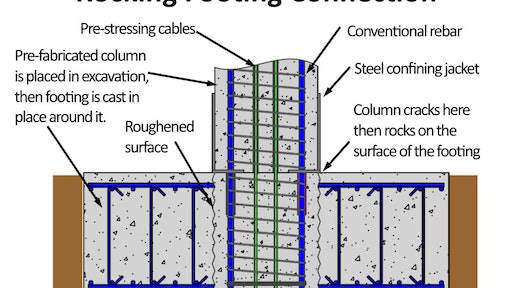 A new design for the framework of bridge support columns and beams, called "bents", looks to improve performance for better resistance to earthquakes, less damage and faster on-site construction. According to an article from ScienceDaily.com, pre-fabrication of the columns and beams off site will help to speed construction. On site the framework just needs to be erected and connected, which researchers say can be done quickly. This is in contrast to the majority of bridge bents currently being constructed as cast-in-place concrete.

One of the biggest challenges with this new process is being able to design connections that are both easily assembled and able to survive earthquakes, Stanton said. However, the researchers have been able to achieve that goal using common construction materials. high-strength steel cables are used to pre-tension the columns allowing them to move but remain vertical during and after an earthquake. These cables are embedded in the concrete during fabrication off site.

According to the article, this technology was adopted in the building industry in the 1990s but is now being adapted for bridge construction.

In addition to the cables, researchers also protected the ends of the columns with short steel tubes to confine the concrete and prevent points of contact from crushing from high local stresses during an earthquake.

What do you think of this bridge design concept?