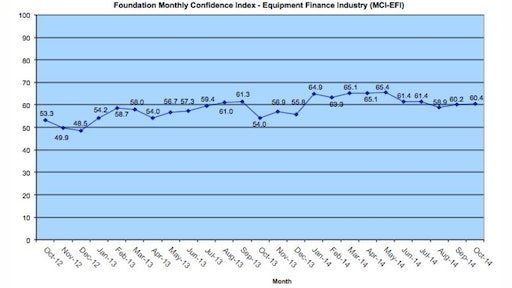 Overall, confidence in the equipment finance market is 60.4, slightly better than the September index of 60.2.

The Equipment Leasing & Finance Foundation's (the Foundation) October 2014 Monthly Confidence Index for the Equipment Finance Industry (MCI-EFI) was at 60.4, slightly better than the September index of 60.2, with survey participants indicating increasing or consistent demand tempered by U.S. economic concer. Designed to collect leadership data, the index reports a qualitative assessment of both the prevailing business conditions and expectations for the future as reported by key executives from the $827 billion equipment finance sector.

When asked about the outlook for the future, MCI-EFI survey respondent David Schaefer, CEO, Mintaka Financial, LLC, said, “Application volume has been solid this past quarter. We expect exceptional year-over-year fourth quarter growth to be greater than 50 percent. It's hard to find much negative at this point so we are focused on being disciplined both in terms of credit and pricing.”

Three steps to protect workers and those around the work area - and limit legal fall-out - with a safety first construction project mindset
April 18, 2016
Follow Us