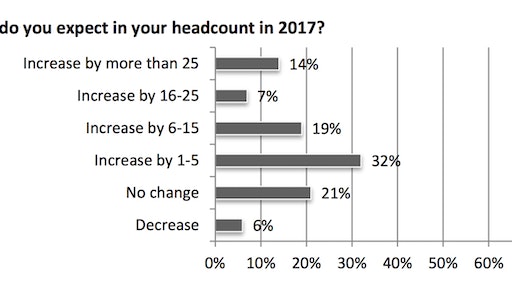 “Contractors have relatively high expectations for 2017 as they predict the economy and demands for all types of construction will grow,” said Stephen E. Sandherr, AGC's chief executive officer. “As a result of this optimism, many firms expect to expand their headcount next year.”

Seventy-three percent of construction firms plan to expand their payrolls in 2017 as contractors expect private and public sector demand to grow in all market segments, according to Associated General Contractors of America (AGC) and Sage Construction and Real Estate survey results. Despite the general optimism outlined in Expecting a Post-Election Bump: The 2017 Construction Industry Hiring and Business Outlook, many firms report they remain worried about the availability of qualified workers and rising health and regulatory costs.

“Contractors have relatively high expectations for 2017 as they predict the economy and demands for all types of construction will grow,” said Stephen E. Sandherr, AGC's chief executive officer. “As a result of this optimism, many firms expect to expand their headcount next year.”

All but a handful of contractors expect the overall construction market to expand or remain roughly the same in 2017 compared to 2016. A total of 46% of respondents said they expect a higher dollar volume of projects in 2017 than in 2016, versus just 9% who expect a lower volume, for a net positive reading (based on unrounded numbers) of 36%. The remaining 45% expect volumes to remain more or less constant.

Contractors had a positive outlook, on net, for all 13 market segments included in the survey. Respondents are most optimistic about the outlook for both the hospital and retail, warehouse and lodging markets (23% net positive for both).

The only market segment where contractors are less optimistic this year than they were last year is the multifamily residential sector, where there is an 11% net positive for the year vs. a 14% net positive last year. It is important to note, however, that most respondents completed this survey in the days and weeks following the elections and may have based some of their optimism on the recent growth in stock market values and the fact the president-elect has repeatedly promised to make new investments in infrastructure, association officials noted.

One reason many firms expect to make only slight increases to their headcounts is that they appreciate how difficult it will be to find enough qualified workers to hire. Indeed, 73% of firms report they are having a hard time finding qualified workers. And 76% of respondents predict that labor conditions will remain tight, or get worse, during the next 12 months.

In addition to coping with worker shortages, contractors are also worried about the continued increase in health care and regulatory compliance costs. Eighty-four percent of firms report the cost of providing healthcare for their employees increased in 2016 while 82% expect their healthcare costs will increase in 2017.  And 41% of firms report they are worried about the growth in federal regulations.

Even as firms spend more on healthcare and regulatory compliance, they are prepared to increase investments in information technology (IT). According to the Outlook, 35% of firms report they invested at least 1% of their revenue in IT last year. In addition, 40% say that their IT investments will increase in 2017. Contractors are also becoming increasingly aware of the need to better protect their data. Seventy-seven percent of respondents report they currently have an overall IT plan in place to prevent against hacking.

“With competition heating up for both projects and qualified staff, construction companies are relooking at how technology can help them meet these challenges head on,” said Jon Witty, vice president and general manager for Sage Construction and Real Estate, North America. “Contractors are not only increasing their investment in IT, they are becoming more strategic about securely applying information technology to all aspects of their business.”

Association officials noted that overall economic conditions indicate 2017 should continue to be positive for the construction industry. But they added that it appears the Outlook responses are based as much in high expectations for the incoming administration and the President-elect’s commitment to investing in infrastructure, improving federal health care laws and reducing regulatory burdens.

“While the new administration and its stated policy objectives offer many reasons for optimism, there is a significant risk to the industry if the new Congress and administration under-deliver,” Sandherr said referring to policy proposals the association is making. “If plans to invest in infrastructure, reform healthcare laws and roll back regulations are delayed, many contractors will likely scale back their plans to expand headcounts.”

Sandherr added that the association has crafted two plans to help guide the administration and Congress and ensure they act quickly to deliver on their election pledges. The first plan is the association’s Agenda to Rebuild Infrastructure and the Construction Workforce, which outlines a series of steps federal officials should take to finance and fund new infrastructure investments and accelerate federal reviews. The second plan identifies regulations and executive orders that new administration should cancel, improve or reconsider.

“Together these two plans offer a clear roadmap for the administration and new Congress to help deliver on the promise of this year’s relatively positive construction outlook,” Sandherr said. “As long as the new administration follows through on its commitments, construction firms will see more demand for their services and, potentially, slightly better profit margins.”

The Outlook was based on survey results from nearly 1,300 construction firms from 49 states and the District of Columbia. Varying numbers responded to each question. Contractors of every size answered over 30 questions about their hiring, workforce, business and information technology plans.

Chasing New Construction Work in 2017? Here’s Where to Look