While Producer Price Index for construction materials tipped down, prices remain higher than in October 2010 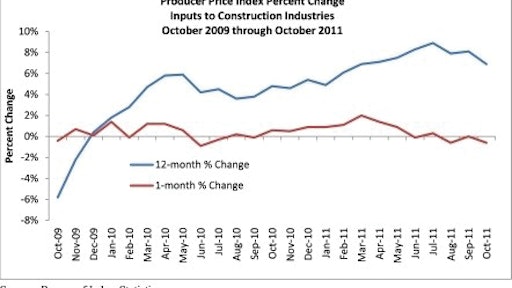 Nonferrous wire and cable prices dropped 5.8 percent in October but are still up 0.6 percent compared to the same time last year. Iron and steel prices slipped 0.1 percent for the month but were 14.4 percent higher during the past twelve months.

Overall, the nation's wholesale good prices slipped 0.3 percent for the month but are 6.1 percent higher than one year ago.

"It would be easy to interpret today's PPI report on the monthly decline in construction materials prices as simply a reflection of the weak U.S. construction economy, and leave it at that," said Associated Builders and Contractors Chief Economist Anirban Basu. "However, more is involved than simply the waning demand for material for purposes of construction and the performance of the U.S. economy."

"Much of the gyration in prices that we observe during the course of a year has more to do with investment portfolios and emerging economies than domestic construction," said Basu. "Specifically, investors have become increasingly apprehensive about the stability of Europe and evidence of economic slowing in developing economies such as China and Brazil. This appears to have resulted in less demand among investors for commodities related to construction, which has produced a general softening of prices"

"It is quite possible that this trajectory will continue as the global economy faces additional headwinds," said Basu. "However, any decrease in the cost of construction materials is always good news for owners, developers and construction contractors."