Organizers hope the 2015 auction scheduled for February 4 is even bigger than the record-breaking 2014 auction, which raised more than $810,000 in gross revenue 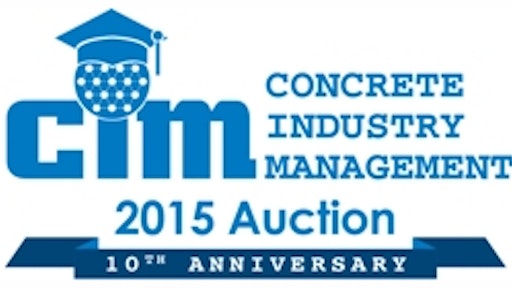 The Concrete Industry Management (CIM) program – a business intensive program that awards students with a four-year Bachelor of Science degree in Concrete Industry Management – is seeking donations for their tenth annual auction to be held at the World of Concrete. The auction is scheduled for Wednesday, February 4, 2015 at the Las Vegas Convention Center. The silent auction will be held from 11 a.m. to 1 p.m. and the live auction begins at 1 p.m.

According to Michael Philipps, Chairman of the CIM Auction Committee, “The proceeds from the 2015 auction will benefit the CIM National Steering Committee (NSC) and support the current CIM programs, the Executive MBA program, as well as help fund scholarships.”

Organizers hope the 2015 auction is even bigger than the record-breaking 2014 auction, which raised more than $810,000 in gross revenue. The money raised from the CIM Auction will benefit the NSC and support the CIM programs at Middle Tennessee State University, New Jersey Institute of Technology, Texas State University and the California State University - Chico.

"The NSC was pleased that the 2014 World of Concrete Auction surpassed the previous year's total proceeds by almost $200,000,” commented Philipps. “This is yet another example of the high value the concrete industry places on the CIM program. The NSC appreciates the record number of donated items and all the bidders that helped make last year's auction a huge success."

“The NSC of CIM has raised more than $4 million through the previous nine CIM auctions,” said Brian Gallagher, CIM Marketing Committee Chairman. “We’ve been blessed with tremendous support from the concrete industry,” he added.

Those interested in making a donation should contact CIM Auction Committee Chairman Michael Philipps at michaelf.philipps@cemex.com or (713) 722-2969.